The most striking similarity of Sarah and St Helena Islands has to be the detailed, beautifully executed water colour paintings of each prison island, undertaken with great finesse by two of their convicted inhabitants!

In my last post, I featured a photograph painted by William Buelow Gould of Sarah Island, thought to be painted around 1833. William Buelow Gould was in fact a convict, originally from Liverpool in England. He was transported for seven years to Van Dieman’s Land in 1827, for stealing a coat by force of arms. Continued breaches of discipline for petty theft, drunkenness and forgery saw him sent to Macquarie Harbour twice, reaching Sarah Island in 1832 where he was recruited as a house servant to an amateur natural historian Dr William de Little.

It is thought Gould received artistic training in London and worked as a painter of porcelain. On board the voyage to Australia, Gould painted the portraits of the officers and on Sarah Island he was put to work producing still life images of birds, fishes and other sea life.  If you’ve ever read Richard Flanagan’s 2001 novel ‘Gould’s Book of Fish: A novel in 12 Fish’, then you’ll be amazed to know that those are William Gould’s images. These images are incredibly precise, showing great understanding and care for the way he has depicted his subject matter.

Lucky for us, he painted Sarah Island before he was transported to Port Arthur in 1833. This image shows Sarah Island’s entire prison establishment, including ship building in the foreground and many long, white buildings used variously for accommodation, food production and trades.  Gould’s handiwork makes Sarah Island look like a most orderly, productive township – apart from what appears to be a flogging tripod on the left! 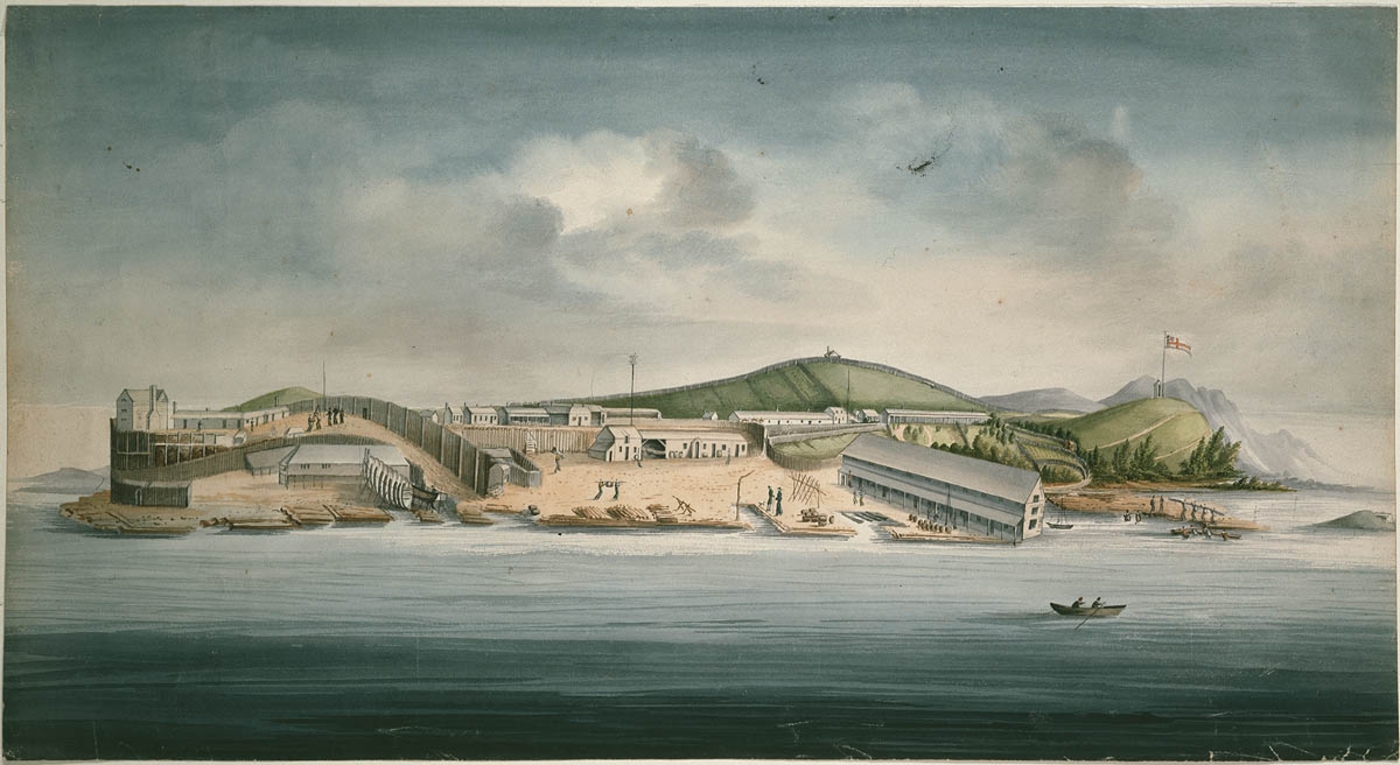 Compare the style, colour choice, angle of perspective and specific details of Gould’s work to that of another inmate, Charles Winn. Winn also painted his prison island, St Helena, in 1878. Neither knew each other and their works were painted 45 years and 3 states apart! It is a fascinating comparison to be made, of two criminals whose talents were thankfully realised by those in charge, to the benefit of history lovers over a hundred years later.

Both are painted as though on a boat in the sea looking back at a panorama of the island. Striking features of both are the depictions of large scale clearing of the native vegetation across the whole of both islands, right down to the waterline. They depict a similar planning design in the prison buildings, cultivated areas and high fence lines.  Winn’s St Helena paining is awash with the dry yellow and orange colours of the soil, grass and sand of a Queensland landscape, while Gould captures dark clouds and the greeny- blue of the cold, mountainous area of Tasmania. Both are quite still and serene.

The story behind Charles Winn and the discovery of him and his painting in 2013 is another story for the next post.  But I’d love your comments on his work anytime!