You probably saw the fascinating article this week about research into people buried on Mud Island in Moreton Bay. This could not have arrived at a more opportune time, as over the last few weeks Lauren and I have been researching a previously unknown death and burial on St Helena Island (more on that next week!) 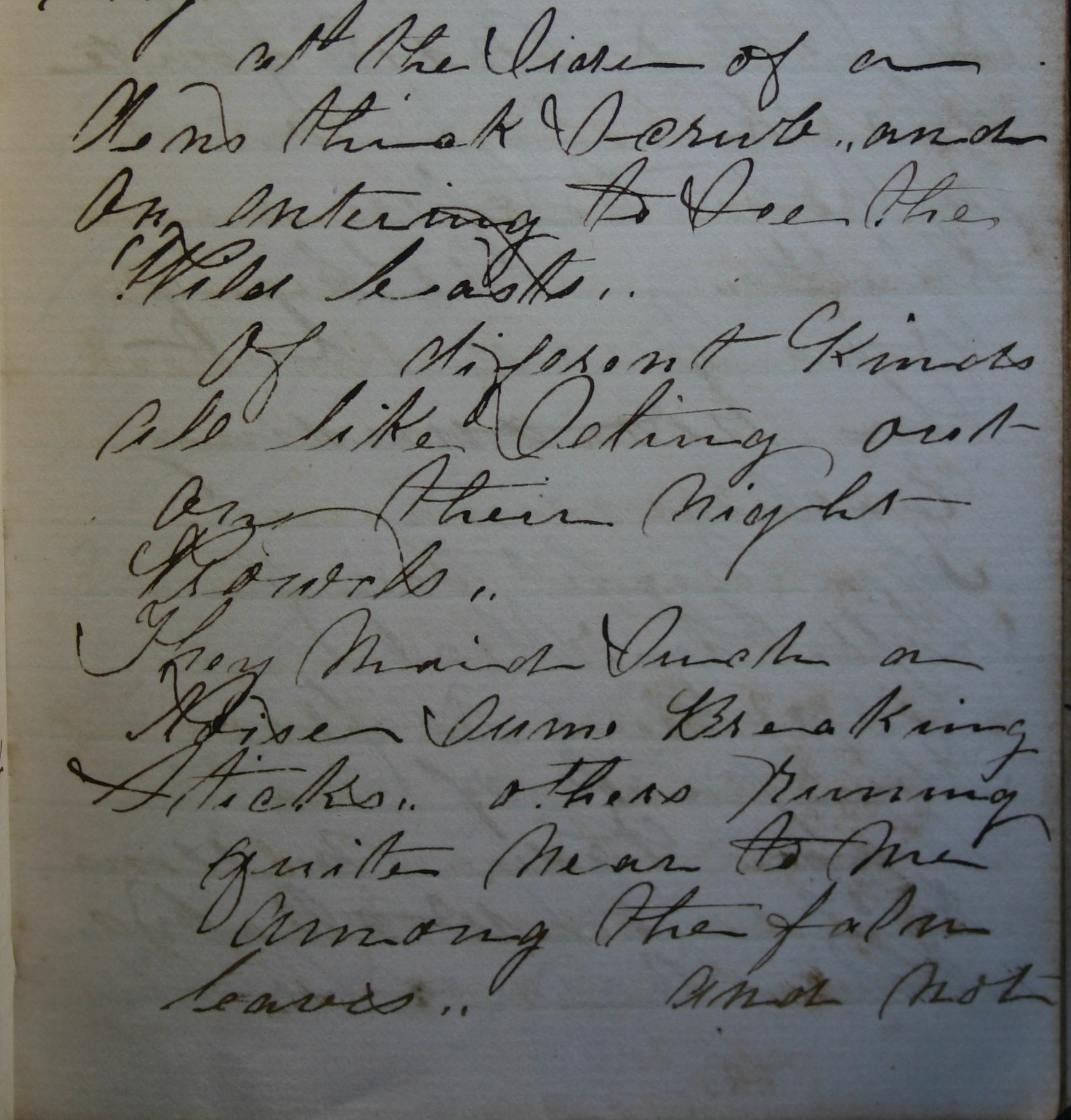 Added to that, our old friend Warder James Aird – protagonist in many of my recent posts and enthusiastic-pursuer-of-any-work-opportunities-within-Moreton Bay– is telling is the same story in his personal diary of quarantine deaths on another small island in the bay, Bird Island. There’s a wealth of stories to be told here!

Quarantine became a big part of James Aird’s life within a few short years of his arrival, due to the fact he had landed employment in boats in Moreton Bay. Quarantine at this time was a constant theme, as more and more boats brought new immigrants into the relatively new state of Queensland. His diary has revealed he willingly volunteered to be the guardian of German immigrants on Bird Island, much further south of the bay near Stradbroke Island:

Scenes of my being camped three days and three nights on a sandy island.

The name is Bird Island in Moreton Bay. The beach swarms all around with monster sharks. Nothing growing.  The height of the tides at high water mark half covers it.  It is composed of sand and shells. A great tide ebbs and flows on each side of it with the sea fowl making a noise overhead and three hundred immigrants all German. I was landed on one end of the island, my space measured on the sand, the Germans told by their interpreter not to trespass or come near me during my stay on the island. They were in quarantine and some dying of a contagious disease. Their ship was lying off some distance getting fumigated. This was my first shape of getting into quarantine during my duty in Moreton Bay.

This was the German vessel “Wandrahm’, arriving in Moreton Bay on 12th January 1866 at the same time as many other vessels needing to be quarantined. It was not usual for so many passengers to be brought to this small island, but the ‘La Rochelle’ was already quarantined at Dunwich and alternatives were few. No arrangements were made on the island for passengers, so only half the passengers were put onto Bird Island – healthy young men and married couples who were accommodated in tents. The females and sick stayed on board as there were not enough tents to go around.

48 people died on the Wandrahm of Dysentery, Typhus and – as recounted by the passengers – lack of food and clean water. But more deaths ensued immediately upon arrival, as related by James Aird:

So on this night some four men of these immigrants got out of their depth into the current and was all drowned. Only one’s body was found. The rest, as was thought, fell a-prey to these monster sharks as I seen them in at the beach next day.

It seems 8 men were floating a large log for firewood around the island to their camp by sitting on it and paddling. Currents drifted it off shore and it rolled, with 4 deaths and 4 survivors. James it seems had a great deal of work ahead of him and was prepared to bluff his way through it.

The ship docks and the captain being all that could speak English with the exception of two lady passengers. So I was asked by the two former to oblige them with my company on this island as I have formerly described. So I had no hesitation as long as I was kept apart from the sick till I seen the ship smoked and clean and that the quarantine laws was not infringed on by no boats going near the ship or the passengers. It was in the summer of 1866 I was landed to look after this duty; also to keep a reasonable distance from these people. So as before stated, I went partly to keep these foolish people from going into that fearful current and, if possible, to keep them out of the water. My appearance had a most decided effect as I landed carrying pistol guns and irons all ready to open fire on the first one that I seen misconduct themselves or being mutinous to this law. Their interpreter telling them that I was ready and would fire on them unless they obeyed this and the captain’s orders.

So here I am kindling my fire with a few pieces of beach wood to make tea, the night being fine and clear. So canvas town is here in earnest. They are all living in tents put up for the time being, with their things piled up outside. They seem never to be of the watch of me and appear to give me a wide berth night and day.  So after I had got tea, it was my lookout to keep my arms in my possession during the night and get a few hours of sleep if possible. So my ground put me in the position of the only two large trees on all that island. So I had no tent nor any covering, only my hammock and blanket. So I found a plan at once to secure my arms and myself from being attacked when asleep; that was by getting up this tree as high as I could, making my hammock fast, and then getting up as high on the second tree and stretching it very tight; then to ascend with my blankets. The same with my gun, pistols and irons till I had all I possessed nearly up on the tree, my arms as near to the hammock as I possibly could. So when I looked down it just put me in mind of Robinson Crusoe as I had ready a sofa and a castle in the air and looked down and seen a canvas town and my people all quiet, only still watching my movements on the tree.  I got down in the dark and seen looking up it put me in mind of a large nest.

This work taking me a long time to get all complete so had a walk on this lonely beach with not one to speak to. I am here among near four hundred people and not one to speak to a word of English. So it is getting late and I must ascend the tree again. At midnight it commences to blow fresh. My hammock is swinging about. But I lie very easy and would rather be here than on ship board tonight as it looks very wild. So I am right as long as the tree stands. Canvas town is making such a noise as their tents is like to go away with the wind into the Bay.

After blowing for a long time comes in the morning to rain heavy. My hammock holds the rain till I am lying in water. Is at last obliged to get out of it and make the best I could till daylight. Came and by midday got all dry under a scorching sun.  I passed the rest of my time on the tree till our boat come in sight one blowy morning and took me off. It was astonishing to see how soon I took down my furniture and was afloat once again from that sickly island. A great many people died and was buried here.

“A great many people died and was buried here.” I have researched and can hardly find any reference to anyone buried on Bird Island. I’m guessing the body of the drowned man was. In the same vein as Mud Island, these unofficial grave sites remain unrecorded and forgotten in time. Bird Island has slowly eroded till it is smaller than it once was. I imagine some of the graves have eroded away too. At least James’ diary confirms that burials did indeed take place here.

Quarantine was to become a major part of James Aird’s life. Later in 1866, he was stationed on the hulk ‘Proserpine’ overseeing prisoners as they set to work building a Quarantine Station on St Helena Island. After working as a Warder for nearly a decade at St Helena’s gaol, he moved his family to Sea Hill near Rockhampton, taking the position of Lighthouse Keeper at a lonely outpost. Sea Hill Quarantine station was officially declared Jan 1877 and James remained in charge there, becoming Postmaster in 1884, which his wife Jessie was appointed Telegraph Operator.

Isolation is the cornerstone of Quarantining in order to prevent the spread of disease, and as such the Aird family remained isolated in the places they worked and lived. Tragically their isolation worked against them, as 3 very young sons died being unable to receive medical treatment in time and one of their daughters, Dora, went blind after a bout of fever, never to see again. Still, James remained the dedicated adventurer and lived the remainder of his life on the rugged coastline of Qld, surrounded by the ocean. When James Aird died, he was an ‘old and trusted member of the marine staff, in charge of the leading lights at the Pilot station, Gatcombe Head. A Grand type of citizen, faithful in all things through 30 years service to the state.’

The legacy of the intriguing detail captured in his diary continues on for all of us today. We are very fortunate that his great-granddaughter Sandra shared this important historical document with us all.

2 thoughts on “Robinson Crusoe on a Quarantine Island.”