The role of a pioneer Water Police officer in Brisbane in the 1860’s was never highly defined I suspect. Rather, whatever situation arose on a body of water, the Water Police were asked to attend. James Aird, newly appointed Water Policeman in 1863, (and later Warder on St Helena) first showed me this in his diary. As a member of the water police he also became a boat pilot, crewman of any vessel in the bay, inspector of ships, hulk gaol keeper for wayward seaman, quarantine enforcer, explorer and sometime anthropologist/ linguist of aboriginal culture and language

‘my services were required to go with the Governor, Sir George Bowen of Queensland and other members of Parliament, among the islands, to the southernmost extreme end of the Bay, our destination being Broadwater.’

The Broadwater, Gold Coast of today is very different than that explored by James Aird in 1864.

And the next saw him guarding newly arrived German immigrants on Bird Island:

… in the summer of 1866, I was landed to look after this duty and instructed to keep a reasonable distance from these people. As before stated, I went partly to keep these foolish people from going into that fearful current and, if possible, to keep them out of the water. My appearance had a most decided effect as I landed carrying pistol guns and irons, all ready to open fire on the first one that I saw misconduct themselves or being mutinous to this law. Their interpreter informed them that Iwas ready, and would fire on them, unless they obeyed this and the captain’s orders.

One of the most riveting stories of James Aird’s diary was that of being asked to pilot a boat entering Brisbane, full of newly arrived South Sea Islander passengers bound for work on pioneer sugar plantations. Being 1864 or 5, he would have seen the beginnings of the practise of bringing able bodied people from many Pacific Islands to work as a cheap source of labour. This practise saw people recruited, coerced, forced and even kidnapped from their island homes, transported by large vessels to ports in Queensland and there sold off on 3 year contracts as virtual slaves on various Queensland sugar plantations. Limited legislation designed to regulate the trafficking of South Sea Islander people was not put in place until 1868.

James Aird is the best man to describe his duty checking the condition of the boat and its passengers and how it affected him, in the pages of his personal diary:

My duty led me to go to all ships on their coming to port in Moreton Bay for some years, and during that time thousands of immigrants arrived from all parts of the world. Among these, were numbers of naked savages from the South Seas. Coming along sides of the traders, the scene was at some times interesting at other times horrifying – the former being when they had clothes on, the latter when they were almost naked, just as they lived on their native islands. They are each man supplied with a pair of white trousers, one red shirt and a red nightcap to go on shore with. But at this time, they were without clothes because their clothing had not arrived from Brisbane.

They all appear striking on the sails and rigging of the vessel. Our boat comes alongside. You cannot see a white man among them, as the saying goes. They are looking on with mouth open and eyes staring as six armed men mount her deck. Our chief walks aft towards thecabin and meets the captain. He asks him: “Is all well on board, how long out at sea, anydeaths?” He goes into the cabin. We stay on the deck and I take a walk fore and aft. They look a fine race of people, tall and well made; only they look wild and fierce to see so many white men. They pass remarks on us in their native language. They all sleep in the hold; no beds; only coconut fibres for straw. There is a large boiler on deck. It will hold near a hundred gallons. It is supper time. They are eating boiled rice and molasses from this boiler. The tanks of water and firewood are kept near to where they sleep in the hold. They have plenty of coconut with them. I saw plenty on deck. We take some of them onto our boat. Sometimes there is also plenty of sugar cane on board.

The cabin is often full of their bows and arrows, and shields. The arrows poisoned, which is very dangerous if pricking the hands of any person. Their weapons are crafted with some of the most beautiful workmanship on I’ve ever seen – quite a treat to look at. The captain does not allow them any of these weapons on board; he has them all stored in his cabin. Some of them have a hole pierced through their nose and a shark’s tooth as a piece of jewellery hanging near the upper lip. Some of them have their shirt on wrong side forward, others have it off, obviously feel it unnecessary to have it on.

Steamers come from town and take them off to different plantations in thirties or fifties, to suit the planters in Queensland. They are returned to their native islands in three years. All they get is a gun and a few pounds for that service. They go home very proud to make war with this gun at their native home. I have been told by the white man who was on a plantation in charge of these men, that they are, without exception, nearly all pious, the party he got from those islands. He claimed to me that there was no use asking them to do anything in the morning while they knelt praying to God; the last thing also at night – quite an example to the white man in Australia. He also said the missionary had wrought a great work among them on their native isles. He said he had one that served a friend in Queensland, went home, came to him a second time. He praised them much for their work manners and a willingness to do anything, after they could understand what he wanted them to do.

Such is a scene on board of a South Sea Trader. 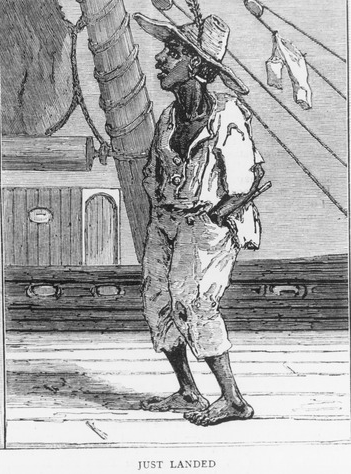 How rare is it to get such a personal insight onto a ship with its human cargo of workers. I admire James for purposefully lifting the professional police veil and seeing all immigrants as people coming to find a better life for themselves. His openness of mind moves prejudice aside and can therefore allow him to admire the individual or cultural qualities of his fellow humans. Through James, we get a rare, personal insight into a South Sea Islander trading boat and a contentious and difficult time ofQueensland’s history.