In the search for warders involved in the Great War, I discovered a man highly skilled in all aspects of the military, willing and able to fight for his adopted country, but who never left Australian soil. Warder John Burns was the shortest A.I.F enlistment of any of the St Helena Island prison warders.

Originally hailing from Ireland, he had spent 18 years as a soldier with the Royal Irish Rifles.(1) Since enlisting in 1890 he was stationed in Malta, India and Sth Africa. Yes, not only has Warder John Burns enlisted in the First World War, he’s also a veteran from the Boer War campaign where he fought between 1899 and 1902. Despite being described by the Royal Irish Rifles as ‘slightly knocked kneed,’ John’s military service saw him rise through the ranks to become sergeant in the 5th Battalion and he earned great praise as being of ‘exemplary character.’ (2)

His discharge in 1908 came at his own request ‘with a view to a pension,’ but, after a brief stint as a watchman in 1911, he made a bold move over the seas to Australia. With his exemplary military background, John was unsurprisingly appointed to St Helena as a Probationary Warder and Drill Instructor in April 1914, ready to train the unsuspecting St Helena warders in correct drill formation.

The Australian Army had a highly skilled military veteran at their disposal at the outbreak of WWI in the very year John Burns was appointed St Helena warder. Surprisingly, John did not enlist immediately. Instead, 1914 saw him take a few bouts of sick leave soon after being appointed, be cautioned for a number of official misdemeanours over the next few months, as well as the serious default of overstaying his leave for 4 days, for which he was fined £10. By January 1915, he even resigned and was reappointed on the same day, for reasons unknown.(3) 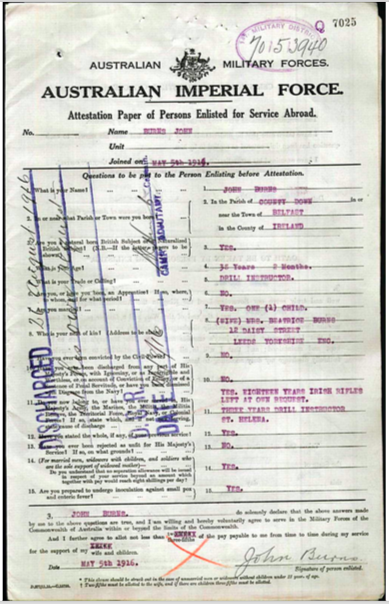 It wasn’t until the 5th May 1916 that John Burns resigned from St Helena Penal Establishment to join the Australian Expeditionary Forces. On enlistment, he stated he was 38 years old, with a wife Beatrice Mary and one child at home.(1) Deemed fit for active service, he was appointed to the 11th Depot battalion and had begun training at the Corporal school in Enoggera, Brisbane by August. Then suddenly, John Burns asked for a discharge.

In a handwritten letter(1), he explains that his wife and 3 children were living in England and not expected to emigrate to Australia until the war was over. In fact Mr Burns had enlisted in the army so as to bring his family back with him at the end of the war. He went on to explain that his wife had recently been very ill and had an operation for cancer of the stomach, arriving in Brisbane the week before, unable to take care of their 3 children, aged 19, 16 and 10. John felt he needed to be released from his duty ‘for some months’ to go to their immediate assistance to find a home and employment for the children, as they were ‘absolute strangers in this country.’

This is where the gaps begin to widen in John’s life story. John had in fact married his wife Mary Beatrice Garner on the 20th October 1897 in Poona, Bombay, India, when stationed there with the Royal Irish Rifles battalion. This was Mary’s birthplace, and they had a daughter Alvira Rose at Poona in August 1898. They went on to have 2 sons in England and Ireland, John and Leslie, but none of them had emigrated to Australia with John. On enlistment, John seems to have neglected to mention that he did in fact have 3 children, not one.

John’s letter was accompanied by a letter from his wife Beatrice Mary(  \1), to the Major in charge of John’s regiment:

Having arrived from England yesterday with my 3 children, to join my husband Mr J. Burns, I find him enlisted under your command, which upset me very much and I am writing to ask if you could release him from military duties and allow him to return to civil employment, as being in a very poor state of health and my children requiring firmer control, I dread being left alone in a strange country under the circumstances. I should feel very grateful to you if you could grant my request. Awaiting a favourable reply.

I am Sir,
Yours respectfully,

Approval was given and John also returned to St Helena to resume duty as a warder not quite 4 months after he had left. He remained on St Helena for the next 2 years. But again, in the last year of war, on the 21st February 1918, John went on leave and simply did not return.

In true John Burns’ style, his story is now becoming one of ‘history’s mysteries’ and the truth is out there somewhere. Belinda’s records state he was immediately transferred to Rockhampton Prison (3) and later has an address in Sydney.(1) Fellow researcher Sandy has been locating all manner of documents and can see that John and his wife Mary separated, with Mary remarrying in N.S.W. in 1921. Added to that, Sandy’s electoral rolls indicate John is back working and living on St Helena Island from 1918 to 1934 – 2 years after the St Helena Prison Farm closed! It looks like John is having the last laugh until we find the true end of his story one day….