Ludwig Leichardt Rowe was not the relative of Australia’s inland explorer Ludwig Leichardt, just his namesake. He was a St Helena and Boggo Road Prison Warder, a World War I soldier, a Policeman, a farmer, labourer and a driver, but he was dismissed from all his positions. He was a drifter. His wife called him a ‘rotter’ and a ‘cove who was always being sacked.’ (1) He was a man who was on the opposite side of the law as well – a perpetual thief who was also accused of shooting his wife. He was also a prisoner interred in the St Helena Penal Establishment.

Ludwig’s time in the St Helena Penal Establishment as a Warder lasted barely 5 months. Appointed as a Warder on December 18th 1913, Ludwig found himself before the Superintendent on charges on a regular basis: (2)

Reported by Chief Warder, found Guilty. Fine £2/6 and informed that for a similar offence his dismissal would be recommended.

With breaking a key off the Chubb lock and not reporting the same to the Chief Warder. Head broken off key.

Gross neglect of duty by leaving one cell unlocked in D Wing on the night of the 21/2/14.

Reported by Chief Warder and Cautioned and advised to be more careful in the future otherwise his dismissal will be recommended. Supt.

Gross neglect of duty for not taking up his position in the doorway of B Ward to count in the prisoners into A & B Wards at Evening Muster. Also when ordered to do so by the Superintendent and told by him that 8 prisoners had passed into A Ward he neglected to count the remainder into A Ward and gave in a Blank Return.

Being a Police Officer previously in the New South Wales Police Force, it could have been hoped that he was used to dealing with regulations, criminals and discipline, but it looks to have not prepared him for life in the St Helena Penal Establishment. His enlistment in World War I occurred soon afterwards on the 20th August 1914, at the outbreak of war, but this did not last long either. (3) His official war records are unusually empty of detail, and in fact tell no story at all, and his time in Egypt has been pieced together from post war court proceedings back in Queensland. 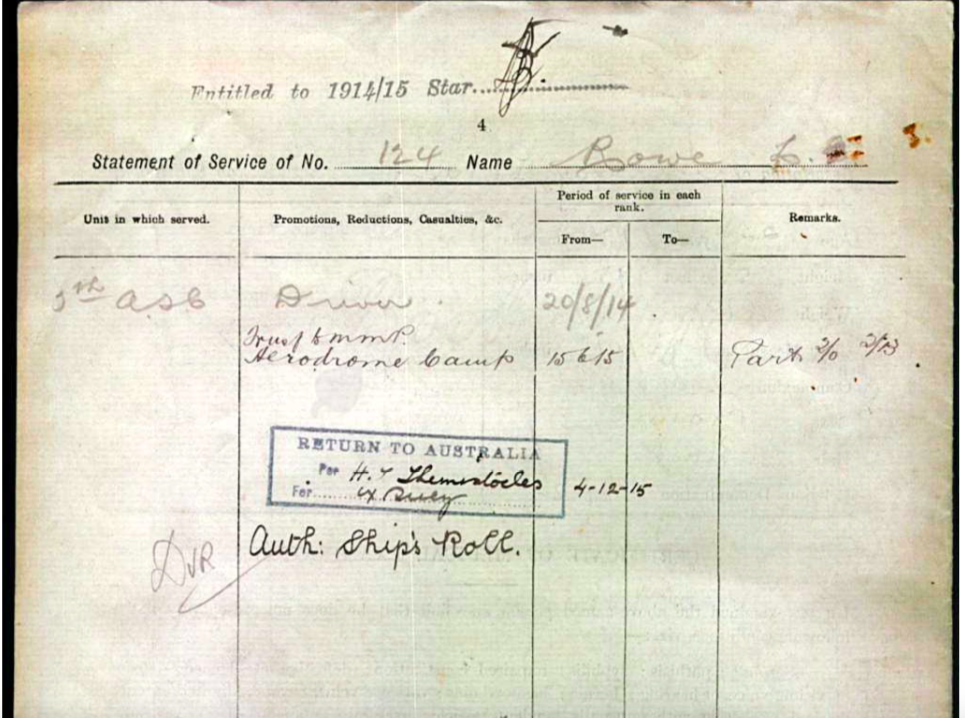 Ludwig was 22 years old when he enlisted and was appointed immediately 1st Light Horse Brigade Training, then headed to Egypt, where he remained for the duration of his time overseas. He was placed with 5th Australian Army Service Corps Company as a driver from the 20/8/14, as part of the Supplies and Transport division. Ludwig said he did not go to Gallipoli as he “stayed with the horses in Egypt.” Other reports suggest that he pretended to be insane and even deaf to avoid going to the front line. Ludwig said he had a nervous disposition and it was agreed he was in great fear of going to the front line. (4)

He was transferred to Mounted Military Police on the 15/6/15 at Aerodrome Camp at Heliopolis. Mounted Military Police were in charge of keeping order amongst the troops, security duties and generally ensuring there are no criminal activity. Heliopolis was a large town in Egypt housing a large training camp for soldiers as well as a large hospital for the wounded. Large numbers of Australian troops moved thorough this area and it was agreed that maintaining the ‘larrakin’ behaviour of Australian soldiers enjoying their first overseas experience required dedicated Military Police.

Ludwig arrived back in Australia on the 1st January 1916 which allowed his wife Lillian to at least know where he was. In typical Ludwig Rowe style, he had enlisted as a single man, listing his mother in Macleay River as his Next of Kin. This caused issues when his wife Lillian, living at One Mile, Gympie, Qld with her mother during his time overseas, was asking the war office for information about his whereabouts in 1915. (3) Ludwig and Lillian married in 1912 (5) and their life was far from stable, moving between Sydney, Brisbane and Gympie following Ludwig’s various jobs. Often Ludwig would go for months leaving Lillian and daughter Ruby living at relative’s houses until he brought them to him. 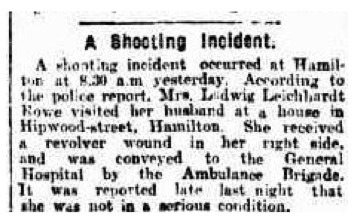 Lillian accused Ludwig of ongoing and serious domestic violence, of not giving her money to feed and clothe the family and of not allowing her to go out at night while he dined out and came home in the early hours of the morning. (1) Lilian accused him of keeping a mistress, which Ludwig denied, saying Elsie was not a mistress but a housekeeper. (4) When Lillian arrived at a house in Hamilton in 1920 where Ludwig and Elsie were, Lillian was shot in the right side and hospitalised. Reports variously state it was either an accident of self-inflicted, with the gun lying close to where she stood in the room. (6) At this time Lillian was in court demanding maintenance from him, despite her daughter Ruby tragically dying, aged 5 years old, in April 1919. (7)

But another daughter, Iris, had already been born in January 1919 (5) to Ludwig and Elsie. Officially, Ludwig maintained he was married to and living with Lillian in Bulimba and court cases in 1920 saw Elsie state she was a single woman and would not say who the father of her child was. (4) Another child, James was born in 1922 and Ludwig and Elsie remained together until they died, becoming husband and wife in 1961 after the death of Lillian. (5)

Ludwig Rowe is a story maker rather like myself. His stories are intricately woven, and full of colourful detail. They are not always true, and Ludwig seems to have lived one truth in the stories he tells to himself and all others around him and another truth in his actions. From 1912 until 1921 he seems to have been very good at talking his way into employment, becoming a policeman in both Queensland and New South Wales, fired from the police force in Brisbane for ‘wilful neglect of duty.’ He became a Warder in both St Helena Prison and Boggo Road Gaol, joined the Military Police in Brisbane and became a carter and labourer, each one lasting merely months when was either sacked or resigned, moving on to another town, city, or region to start again with a clean slate. He even tried to select land in the country at this time but it fell through. (1) 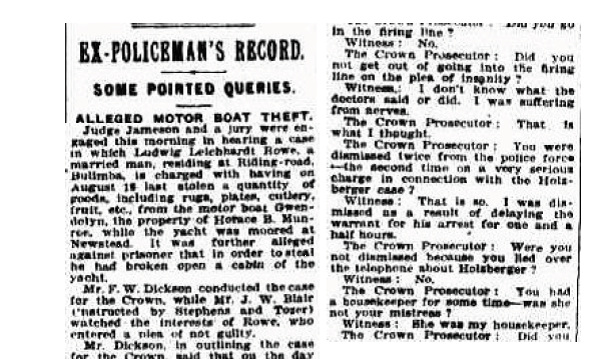 It was in 1921 that he first became a criminal. He was found in possession of stolen property –cutlery, rugs, and plates – from a Yacht moored at Hamilton, but plead not guilty, claiming they were his own. (8) And here is where history shows life’s ironies – Ludwig was sentenced to 1 year’s Hard Labour and imprisoned in St Helena Penal Establishment. (9) I can only imagine the shock on the faces of many long term St Helena Warders as they recognised him walking through the main gates!

Upon his release, he took to farming at Kuraby but his criminal tendencies were not curtailed, as in 1929 he also was charged with stealing a pig (10) and 3 horse rugs, for which he was found guilty and fined £5 or 1 month’s imprisonment. (11) In 1934 he was charged with stealing a heifer, which was deemed to belong to another man and ordered to be returned. (12) In the same year he was issued with a ‘show cause’ notice when he failed meet the requirements to obtain land at Cadarga near Chinchilla by not residing on it, though research shows the family did settle and farm there from 1937. (13)

I’m constantly amazed by the life history of an individual when it is all drawn together in a biographical story such as this one. Ludwig’s reality seems often at odds with his ambition and dreams and this affected many who were left in his wake. I came searching for a story about a St Helena Warder who became a World War 1 soldier, but got much more than I bargained for. Ludwig Leichardt Rowe is the first St Helena Warder I have discovered who also became a St Helena Prisoner. I wonder if he will be the last.