ST. HELENA PENAL ESTABLISHMENT.
PRISONERS FED ON SOUR GROG, CONFINEE’S COMPLAINTS.
The instructors are supposed to be tradesmen when they are appointed, yet there is the warder/baker instructor who came to St. Helena in April, 1913… Then the sour bread started, and since last year there has been more sour and raw bread than ever has been known in the history of St. Helena…

It was an ominous start for the baking career of Edward Heathcock, but rather unsurprising. Edward had never worked in a bakery, wasn’t a baker and had not been a warder either. In fact in his home town of Stowbridge, England he was apprenticed to his mother Elizabeth as a Small Goods Butcher for 5 years before coming to Queensland. But St Helena Penal Establishment desperately needed a baker, having lost Warder/ Baker William Galloway in February 1912, dismissing his replacement Augustus Ainsworth in December 1912, and having John Smart, a trained baker, resigning in March 1913. Enter Edward Heathcock, who needed to be trained by the experienced prisoner assistant baker:

There was a prisoner in the bakehouse as assistant before this instructor came to the island. The prisoner in the bakehouse was told by the superintendent and the Comptroller-General of Prisons that he must teach the new warder how to bake, the convict being assured that he would not be forgotten when he petitioned at the end of his sentence for special remission. The prisoner got 14 weeks special remission. As soon as the baker instructor— he is better known Inside the stockade as “Gentle Annie”— got to know a little about the baking, he took the yeast-making and everything over. He told the prisoner (who had taught him what he knew) that he would have to do as he (the warder) told him. So he did. Then the sour bread started, and since last year there has been more sour and raw bread than ever has been known in the history of St. Helena. When prisoners take their bread up and complain to the superintendent or the chief warder, they are often threatened with the cells for making frivolous complaints. I have seen bread made at St Helena that the pigs would not eat, and I have seen batches of bread burnt in order that it would not be seen. It is surprising to see the amount of bread and dough which has been burnt in the firebox or dumped up on top of the oven.’ 1.

Luckily for the St Helena Island Warders, families and prisoners, World War 1 intervened and Edward enlisted on the 15th September 1914 aged 28. He was placed into the 2nd Light Horse Regiment ‘C Squadron’ in the rank of private and with the role of signaller. The regiment headed to Gallipoli and by 12 July 1915 he was promoted to Signal Corporal at Anzac Cove. Unfortunately Enteric Fever was to take its toll. Enteric Fever was not an uncommon event in the crowded trenches of Gallipoli, where faecal contamination of food and water occurred in crowded unhygienic conditions. In October, Edward was admitted to hospital in Lemnos and by December he was in Alexandria with severe enteric fever. 2.

From there his return to Australian shores occurred quickly, as by the 3 January 1916 he had embarked for home. His medical discharge on the 24th April 1916 was not from fever, but due to ‘enlargement and disfigurement of distal end of Metatarsal bone.’ 2. This did not stop him from returning to St Helena Penal Establishment, as only a month later on the 29th May 1916, Edward Heathcock began duties again … but not in the role of baker. It seems that everyone agreed that heshould not revisit the baking ovens. Yet it seems that Edward did not settle easily into the role, as he and another WW1 warder / soldier Patrick Staunton both resigned on the 29th March 1917 to join the Mounted Police in the Northern Territory. 3. 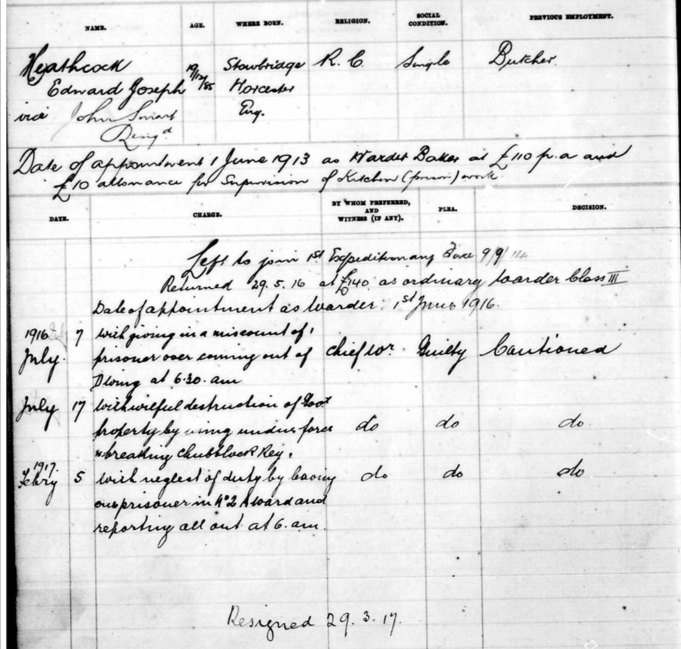 I’ll get to Patrick next week, but why Edward chose to move to the Northern Territory where he had no family and where the extreme climate would have certainly tried the willpower of any Englishman is unknown. But he loved it. For the next 27 years it was his home until his death in 1944. During that time he continued for many years as a Constable in the Mounted Police around Wave Hill, Roper River and Borroloola near the Gulf of Carpentaria. 4. On a visit to England in 1924, he was listed on the shipping register as ‘Police Inspector.’ 5. Newspapers of the time indicate Edward patrolled his district in Arnhem Land on horseback – an area of 36,260 square kilometres. Achieving this meant he would be gone for 3 to 6 months at a time, away from his wife Ruth, whom he married in 1931 at Mataranka.

One of the best decisions he made was to marry Ruth, otherwise known as ‘Pitjiri, the snake that will not sink’ by the Ngukurr tribe. The name is beautifully ironic, since Ruth could not swim. But her recognition by the Ngukurr and other aboriginal people around vast distances of the Northern Territory was thanks to her devotion to the communities in which she worked. It is said the Ngukurr people’ ‘knew’ she was coming and believed that she had belonged to the tribe ‘before the dreaming.’ 6. Arriving from Adelaide with a fellow nursing sister in 1930, Ruth founded the Penola Home bush hospital of the Australian Inland Mission, 300 km from Darwin.

In 1932 both Edward and Ruth were stationed at Myilly Point Aboriginal Compound:

Mounted Constable Edward Joseph Heathcock has taken up duties as superintendent of the aboriginal compound at Myilly Point, with Mrs. Heathcock, who is a trained and fully qualified nurse, as matron of the half-cast girls’ home. Constable Heathcock was formerly stationed at Mataranka. 7

Later they lived around Roper River and Borroloola, (4) where Edward remained a Mounted Policeman and Ruth spent 15 years working with lepers in Arnhem Land, using a combination of western medicine, traditional remedies and psychic ability. She was even awarded an MBE ‘for displaying bravery, fortitude and endurance outstanding even in the history of the Northern Territory.’ In 1941, Ruth set out in a canoe for a 60 mile trip in raging floodwaters down the McArthur River to provide assistance to Mr Foster who had accidently shot himself at his bush camp and couldn’t be reached by plane. It took her 3 days and nights to get to him, and she stayed for 8 days tending the injured bushman, only to have him die an hour before the plane finally reached them. 8

What a life for both of them. Edward travelled the world and Ruth stayed local, but they both found the Northern Territory was the place to call home. Edward was buried in 1944 in Alice Springs, but Ruth, true to her remarkable life so far, outlived him by 50 years, eventually dying in 1995 at 94 years of age. I’m enjoying telling stories on this blog, because they can take you on a epic journey from sour bread on St Helena Island to an amazing pioneer explorer, medicine woman and friend to the Indigenous communities of Arnhem Land in the space of minutes.