I remember being on St Helena Island in the late 1990’s, when an olive expert gave advice to severely prune the trees in the olive grove. These had been growing without any expert tree care for around 80 years and were huge, rambling, messy things that still bore fruit and thrived no matter what. Ranger Paul brought out the chainsaw and did as was advised… it was heart wrenching. What was left was nothing more than oversized stumps and my fellow St Helena Rangers and I wondered if we had gone too far.

But they slowly, gradually, sprung new shoots and branches, and the olive grove once again was the image of when it was at its best during the prison years. It’s a testament to this isolated, but important olive grove and I’d like to write a testament today to the olive trees of St Helena Island. It seems a wonderful way to celebrate the upcoming segment on ‘Gardening Australia’ this Friday 8th February 2019 focussing on St Helena Island’s vegetation. It’s also a great opening to reveal another of my talented cousin, Paula Peeters’ beautiful sketches.

The olive grove on St Helena Island is around 138 years old. It was one of the first trial sites in Queensland, along with Ipswich (1) to see if it was possible to grow trees with a view to them being a viable agricultural industry. Superintendent John McDonald was always a bold experimentalist, having established an extensive sugar manufacturing industry on the island, along with sericulture, many varieties of fruit and vegetable crops as well as livestock. It is recorded that in 1881 (2), John McDonald:

and in 1883, Qld newspapers were reporting that olive trees ‘for marketable purposes, were growing fairly successfully on St Helena Island.’ (1) And so it appears that olives were firmly established on St Helena in the early 1880’s.

Unlike the trees, the olive oil industry did not flourish. It is only in 1895 that mention is made again of an olive oil industry on the island. To do this, experts were brought in to review and prune the trees (don’t you love how history repeats itself?), and this time the expert was an Italian man named Antonio Natall.

The resurgence in the idea of an olive oil industry was attributed to the zeal of Mr Finucane, Chief Clerk in the Police Department. Having lived in Europe, he applied his knowledge to successfully pickling the St Helena olives in 1894, and then brought together men with the skills and political networks with a view to making the industry widespread: (3) 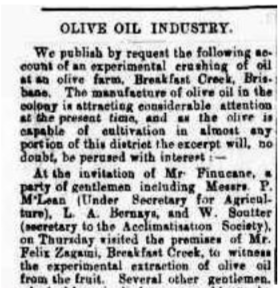 ‘…The success of the recent experiments which were undertaken by Mr Finucane has given quite an impetus to the olive-growing industry, and the Department of Agriculture has received many applications for trunchions, and Mr. Finucane, as well as Signor Zagami, has had many applications for information from persons evidently desirous of growing olive-trees… It has now been shown that (to use Mr. Finucane’s own words) ‘Queensland will produce as good olive oil as anywhere in the world.’ (4)

From here, it seems the industry was pursued by Superintendent James Ryan and Comptroller General Charles Pennefather (who still maintained a residence of the island). Personal memoirs from Mr L. J. De Lange recount how his father, William De Lange, planted several hundred trees from the Middle East. In 1897:

Samples of preserved olives and olive oil, prepared by the superintendent, Mr. Ryan, from the produce of trees growing on St. Helena, have been shown us. The olives are good, though on the small side, through having been picked too early. The oil is also good, but somewhat too yellow, owing to undue exposure. (5)

Yet by 1901, Comptroller General Pennefather won a Queensland Agricultural prize for 12 bottles of Olive oil. (6) Pennefather’s Comptroller General’s report of 1910 reported manufacturing on 15 1/2/ gallons of olive oil and the 1915 report stated olives being sold for £1 19 /-. But it was a short lived and small scale industry, which never really became an agricultural success story. By 1916 it was reported:

Excellent olive oil used formerly to be made at the Penal Establishment, on the island of St. Helena, in Moreton Bay. Unfortunately of late the fruit fly (olive fly?) so damaged the ripe fruit that oil making was discontinued. This oil readily sold in Brisbane at 12/- per gallon. (7) 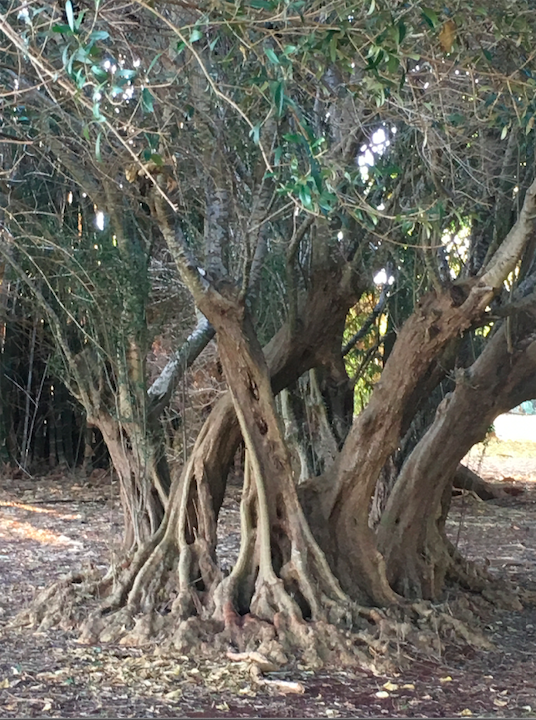 By 1929, it was all but forgotten. But the legacy lives on. If you’re lucky enough to spend time around the Olive Grove today, tucked in between the Superintendent’s Garden and the Warders’ Barracks site, you’ll know how it feels to be in amongst them.  They are mysterious and ancient, gnarled and tired. Better for me not to describe them in words, but to let you enjoy them through Paula’s drawings, sketched on the island in July 2018. I think they speak for themselves.

Tune in to Gardening Australia this Friday 8th February to see more of St Helena Island and its unique vegetation. 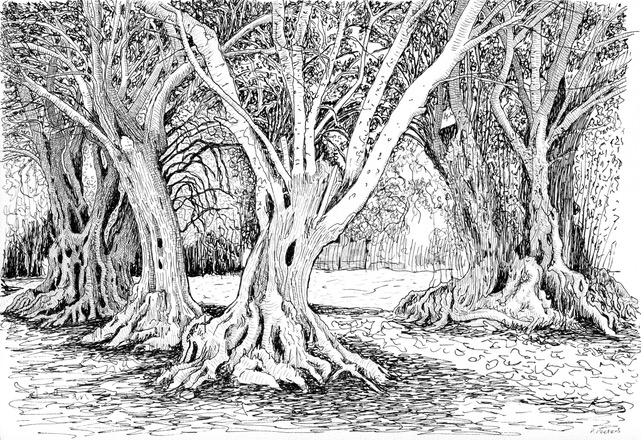 One thought on “The good oil – St Helena olives”