Walter O’Hara seemed destined for a life of crime from his early years.  He is understood to have spent 6 or 7 years at the Lytton Boys Reformatory and had previously been an inmate at the Nudgee institution for a short time.  During his 1889 criminal trial, he stated that it was “his intention to outrival the doings of Ned Kelly, as he was convinced he was born to finish his career on the gallows”. 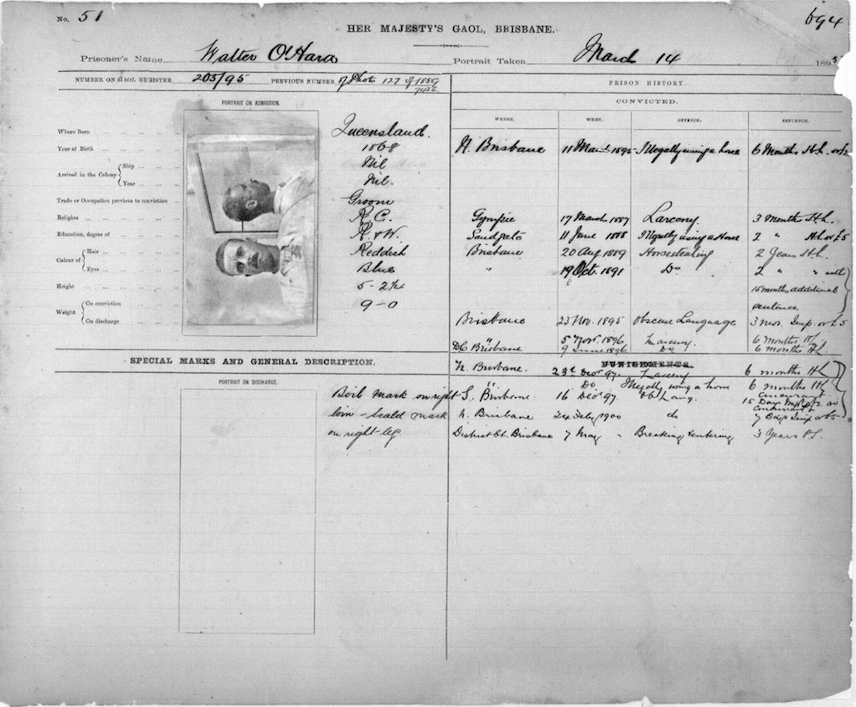 Born in about 1868, Walter O’Hara kept to his word to become a renowned figure of crime. He appeared many times on St. Helena Penal Establishment’s records and remains one of the most colourful, bold and unstoppable characters I’ve come across. Tune in to this video as we introduce Walter O’Hara.

This week I’ll just list the crimes committed throughout his life. 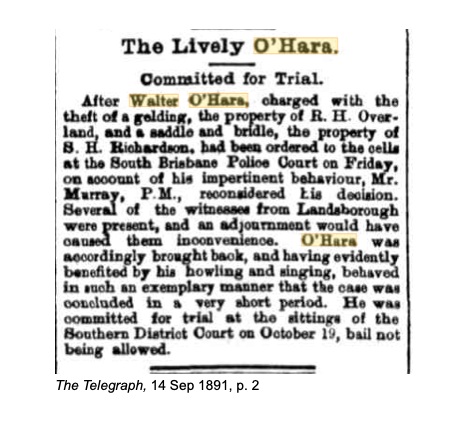 19 October 1891 – Tried at Brisbane for horse stealing from R.H. Overend and larceny.  Sentenced to 2 years hard labour with second case not proceeded with.  He served part of his sentence at St Helena Penal Establishment before being transferred to Brisbane Gaol on 22 June 1893.  It appears he breached Prison Regulations and his original sentence was increased to 3 years and 3 months hard labour.  He was discharged from Brisbane Gaol on 17 January 1895.

11 March 1895 – No sooner than he was out of prison than he was once again offending.  He was tried at North Brisbane for illegally using a horse of an orderly at the office of the Commissioner of Police.  He stated it was because Captain Pennefather, Comptroller of Prisons, refused him a pass to Charleville.  Sentenced to 6 months imprisonment.  He was discharged from Brisbane Gaol on 10 September 1895.

25 November 1895 – Tried at Brisbane for using obscene language.  Sentenced to three months imprisonment.  He was discharged from Brisbane Prison on 22 February 1896.

6 November 1896 – Tried at South Brisbane Police Court for larceny of a portmanteau and clothing.  Sentenced to six months imprisonment with hard labour.

7 June 1897 – Tried at Brisbane for larceny of a watch and chain which had taken place on 9 September 1896.  Sentenced to six months hard labour.  O’Hara stated that the crime had occurred before his last sentence from which he had just been released and in fact had been arrested upon leaving gaol.  He pleaded for a light sentence whilst crying however the Judge said that it appeared O’Hara was “unable to keep his hands off anything if he got a chance”.  The Judge stated that if O’Hara “wanted to show penitence, he should reform”.

23 December 1897 – Tried at City Police Court with larceny of a saddle and bridle and illegally using a horse.  He was arrested attempting to cross the Victoria Bridge without a toll ticket.  Sentenced to six months imprisonment with hard labour on each charge.  Discharged from St Helena on 22 June 1898.

7 May 1900 – Tried at Brisbane with breaking and entering a Queen Street jewellery shop owned by Mr J Mullins.  Sentenced to 3 years penal servitude.  Discharged from Brisbane Prison on 19 July 1902. 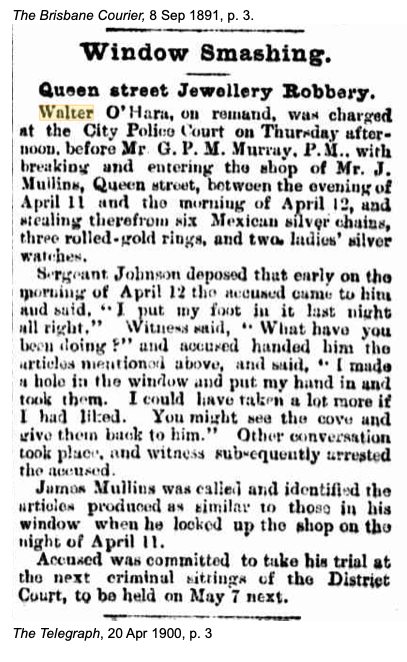 24 January 1914 – Tried at Townsville for vagrancy.  Sentenced to one month’s imprisonment.

23 March 1914 – Tried at Bowen for obscene language.  Sentenced to 1 month’s imprisonment.  Discharged from Stewart’s Creek Prison on 6 June 1914.  He was also known as Frank O’Hara.

2 January 1922 – Tried in Brisbane for assault and using obscene language.  Sentenced to 7 days imprisonment on charge of assault but obscene language charge was discharged.

3 March 1930 – Failed to respond when his name was called in the Police Court on a charge of using obscene language and refusing to give his name and address following his alleged commission of a traffic breach.  Bail was entreated and case adjourned to Traffic Court on 4 March 1930.

Come back next week to see what he got up to once he was locked within the prison walls! 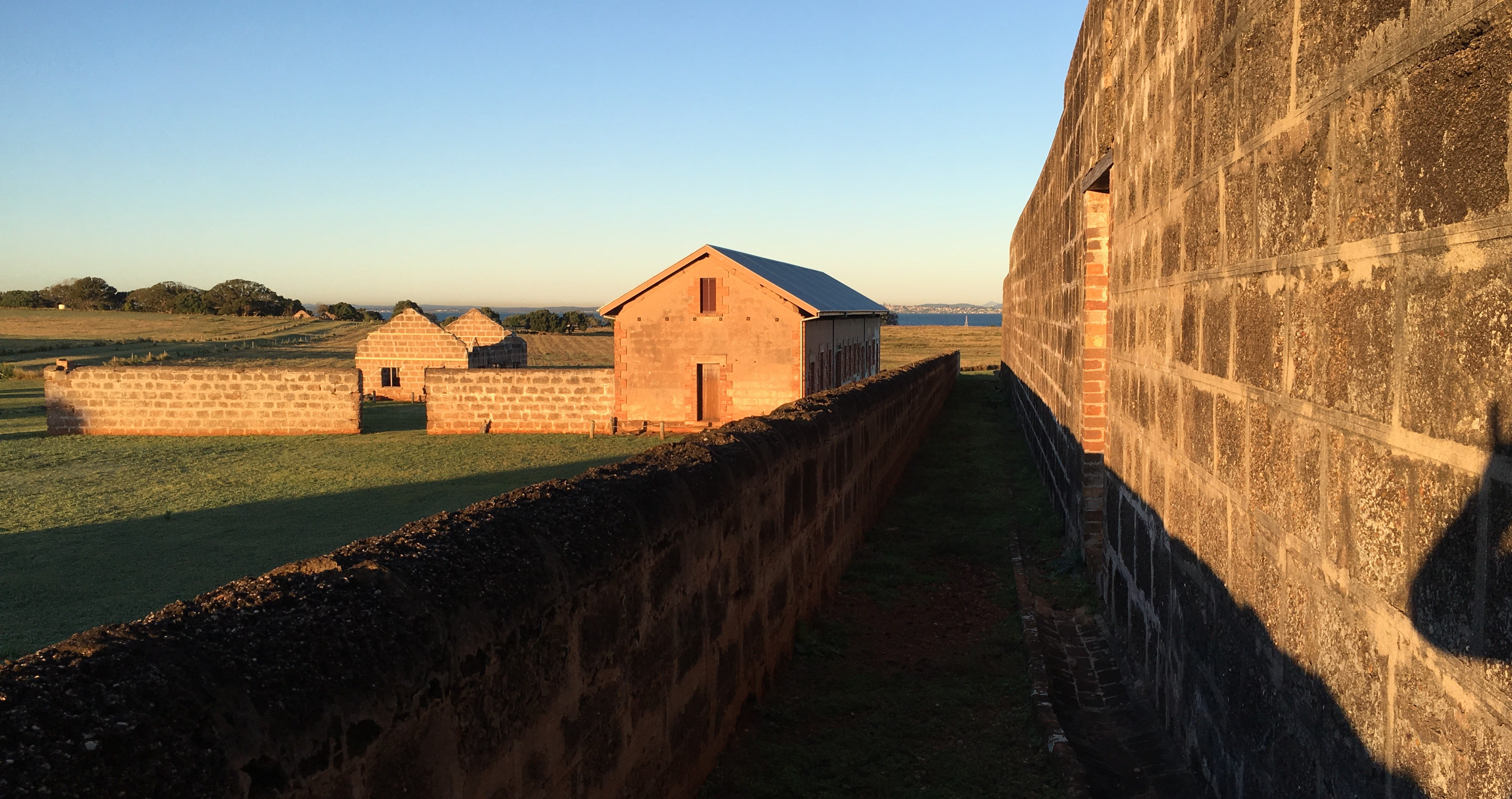 5 “He only borrowed the horse”, The Telegraph (Brisbane), loc. cit.