Two deaths permanently changed our understanding of the many chapters of St Helena’s history. The arrival of Elizabeth Crompton’s death certificate and the obituary of her son Thomas did not fit into any known history of St Helena Island. Elizabeth’s death certificate revealed she had died and was buried on St Helena Island in 1865, as mentioned last week in ‘3 graves that can’t be found.’  Thomas’ obituary read:

Mr. Thomas Crompton who died… at the age of 74 years, was born at Bolton, Lancashire, England. He arrived in Brisbane in 1863, and first lived at St. Helena with his parents. With his father and brothers he was engaged in burning off at St. Helena for Mr. James Campbell. (1)

None of this made sense. What was a woman doing on St Helena Island early in 1865, before the Quarantine Station or the Gaol were even a concept in the Government’s mind? In 1865, St Helena Island was only known for the occasional quarantining of immigrant ships, or as a base for dugong hunting and preparation at the rough ‘boiling down works’ on the island. Thomas’ recollection of having been involved in ‘burning off’ on the island made no sense either, as the forest and scrub on the island was largely intact on the arrival of prisoners to build their prison, being burnt off mainly between 1867 and the early 1870’s.

We’ve had some great correspondence with Jim last week regarding the Crompton family, and Jim suggested the family was on the island due to the head of the family, James Crompton, being involved as a building supervisor for the new St Helena Gaol. Jim offered some great information, but my research and the dates don’t support this aspect. In fact in 1865, James Crompton and his family had found themselves in great financial and personal difficulties and must have been wondering if their journey for a new beginning in a new land was all a major mistake.

James Crompton and his wife Elizabeth (nee Greenough) emigrated from England to Moreton Bay in 1863 with their large family:

Their daughter Elizabeth died on the voyage on February 14th, from diarrhoea. On arrival in Moreton Bay, the Hannah More was quarantined on St Helena Island in June/July 1863 and released from quarantine on the 5th July. In just over a week, the family made themselves known to Brisbane:

BRISBANE. 14th July 1863
It will be seen that a talented family, who have recently arrived by the Hannah More, from England … the ‘Cromptons’ comprise a family of eight individuals, ranging between the ages of six and twenty years, and are a fair specimen of the Lancashire Operative class, self-reliant, and who, though poor, are benevolent, and ready to support a good cause.
… Mr. Crompton we may remark is connected with the Co-operative Cotton Company of Manchester, and will proceed in a few days to some land about to be brought under cultivation for the growth of cotton. (Pimpama)…These people have come out under the co-operative system to grow cotton, &c., in Queensland, being the forerunners of some 6000 souls, who by this plan will in the course of a short time be provided with passage to Brisbane. (3)

It seems that many of the people aboard the ship were ‘fellow cooperatives’ and James became one of the directors, establishing the Lancashire Cooperative Cotton Company almost as soon as he landed in Brisbane. While in Brisbane, the family immediately showed their talents, putting on a philanthropic concert for the Brisbane Total Abstinence Society:

‘The family consisting of father, mother, four sons, and two daughters, have cultivated a fine musical taste, and by judicious training are now able to delight an audience by their vocal and instrumental abilities.’ (4)

The Cromptons and other cooperative members on the ‘Hannah More’ set out with great hopes for a better future. The Lancashire cotton famine had resulted in hundreds of families finding themselves impoverished due to a sudden, sharp decline of demand and prices for cotton in England from 1861. Poor and without a future, they headed to Queensland to establish cotton plantations around the Gold Coast area, paving the way for more Lancashire families to escape their dire circumstances in England. The Cromptons set off to Pimpama in 1863 but within a short time the Lancashire Cooperative Cotton Company began experiencing hard times. 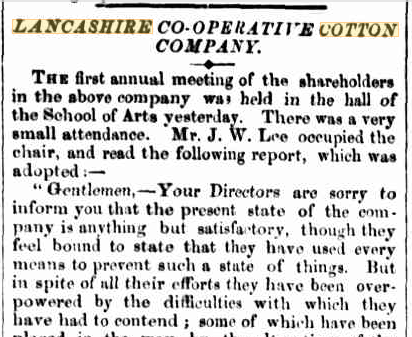 Difficulties in 1864 with the land orders through the Qld Government, as well as other factors, ultimately led to the cotton cooperative being unsuccessful and by February 1865, stakeholder meetings showed major losses and it was declared a failure and closed down. Homeless, poor and in a foreign land, the Crompton family rallied as best they could and found any job they could quickly turn their hand to.

And so they found themselves on St Helena Island. Thomas Crompton describes the family living on St Helena Island and ‘burning off for Mr James Campbell.’ So it seems by the beginning of 1865, the family were definitely on St Helena, collecting oyster shells and coral, and burning these to produce lime, which they supplied to Mr James Campbell’s brick and cement enterprise. (That is a whole new story that will be the feature of next week’s post.)
Hard times dogged this family. In 1864, Charles Edwin Crompton was born in November 1863, potentially when the family were in Pimpama, but died on 10 May 1864. Less than a year later, Elizabeth died, aged 43, from phthisis or Tuberculosis on St Helena Island on 24 February 1865. She was buried on St Helena on the following day in the presence of two witnesses—John Entwistle and James Duckworth. Mr John Entwistle was a fellow stakeholder in the Lancashire Cotton Cooperative and had also married daughter Nancy Compton in August 1864. It seems there was more than one family unit on St Helena Island at the time of Elizabeth’s death.

It is interesting that Elizabeth died on the island but was not transported back to Brisbane to be buried. This either suggests that the family could not afford it, did not have the physical means to transport her or were living there and buried her where they were living at the time. They would have known that she was ill on setting out to St Helena due to the long nature of the illness. Interestingly there looks to be an undertaker there for the burial, a Mr Douglas Folly/ Folley. The location of the burial is unrecorded. 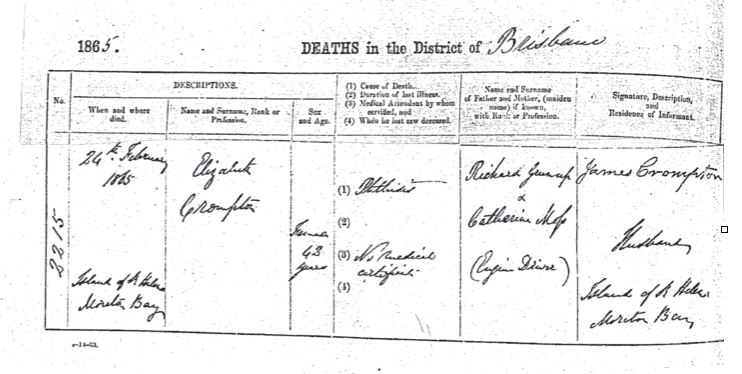 It is not known exactly how long the family remained on St Helena Island. Death struck the family again when their son, John died on 18 June 1866 and he was buried in the Presbyterian cemetery in Brisbane. 2 weeks later, on the 3rd July 1866, James Crompton was in front of the Police Court as a ‘New Insolvent.’ He stated his occupation as ‘Lime Burner’ and his residence as Victoria Point. The third sitting was set for 10th September:

Insolvent was examined by John Etchells, a creditor in the estate. It appeared from the examination that he was a lime burner, and that after his insolvency he had delivered lime to one Hargreaves, in Brisbane. Nothing else material was elicited. The Official Assignee read his report, showing assets nil and debts proved £79 13s 6d. No books of account were handed in. Certificate suspended for 6 months. (5)

So it appears the family were on St Helena Island between 1865 and mid-1866 and that James remained in the occupation of lime burning after leaving the island, working and living in and around Moreton Bay.  But by 6 April 1870, the Land Commissioner approved an application from James Crompton for a ‘Homestead Selection’ of 125 acres at Cleveland. (6) The following year, 1871, he remarried to Mary Cole, stating his occupation as ‘farmer and contractor’ and they had a son, Albert, in 1876. Later, James Crompton established a saw mill on his Cleveland land. An advertisement in the newspaper on 8th February 1878 read:

Wanted. A good team of bullocks to get and draw logs to mill, and take sawn timber where required.
For all particulars, apply James Crompton, Pioneer Saw Mill,
Capalaba, off Cleveland Rd. (7)

Yet 6 months later, he was again in court, once again with an application for insolvency.

31/8/1878 The following insolvency positions were filed at the Supreme Court during the past week: 10th.-James Crompton, of Redland Bay, First meeting ordered for 12th September.
31/10/1878 In the matter of James Crompton, Redland Bay, Engineer. Insolvent. (8)

It appears James moved off the land at Cleveland, as he appears to be living closer to the city of Brisbane for much of the 1880’s. His second wife died in 1886 and on 12 September 1887, James married for the third time, to Mary Olsen in Toowoomba. James Crompton, aged 68, died in the Brisbane Hospital on 29th September 1890.

Such a sad tale has now woven itself into St Helena’s history. It’s amazing to think that previously we did not have this family linked to the island, and the significance of Lime Burning as an occupation on the island before the prison was built was unrecognised.

Lauren and I have enjoyed unravelling this complex information, as it showcases how economics, societal norms, historical events and individual circumstance can play out, linking places and people on a local and global stage.

A very big thanks to Lisa for contacting us and providing a copy of the death certificate. Without people like Lisa in our St Helena Community, we would never have opened a new chapter in the rather large book of St Helena’s history! Lisa and Lauren were able to head to St Helena Island a few weeks ago so Lisa could make those important connections to her family’s history in the place where the events actually occurred. And thanks to Jim for making contact also. Much of our history exists in our memories and Jim seems to be a goldmine of those!

4 thoughts on “When death changes history”