I’ve been to Caloundra with my kids, losing ourselves for hours on the endless sandy beaches, being swallowed up by the waves as we glide and crash ourselves to shore in our best version of boogey-boarding or quietly observing the still rock pools. But I didn’t head to the pandanus tree monument in Queen of Colonies Parade at Moffatt Beach. I should have because I know I would have loved the story that is woven into that particular landscape.

This Moreton Bay story shows off the character of one man who became a significant person in the history of an island further south in Moreton Bay – St Helena Island. He was Mr John McDonald, Inspector of the Water Police and later Superintendent of the St Helena Penal Establishment. He was there on the 14th May 1867, as Superintendent when the prison opened and he’d been there for the previous year in his role of Water Police Inspector, laying the foundations for the prison buildings, clearing the forest and shaping the roads to create the patchwork landscape that still remains in St Helena National Park today.

I think if you are going to be a pioneer, you need a certain strength of character. Definitely a certain stubbornness and determination that will never allow you to give up. Without doubt you need to have high expectations of yourself and others. Probably you need to have a bullishness that will allow you to accept no excuses from those around you. And, as is the case with John McDonald, certainly a love of anything new, dangerous and involves hair raising adventures.

Events in Caloundra were the basis for the praise given by the Colonial Secretary in 1866, when he stated

‘that the Inspector of the force was one of the best servants in the Government employ on the water, and had distinguished himself several times in performing his duty.’ ¹ 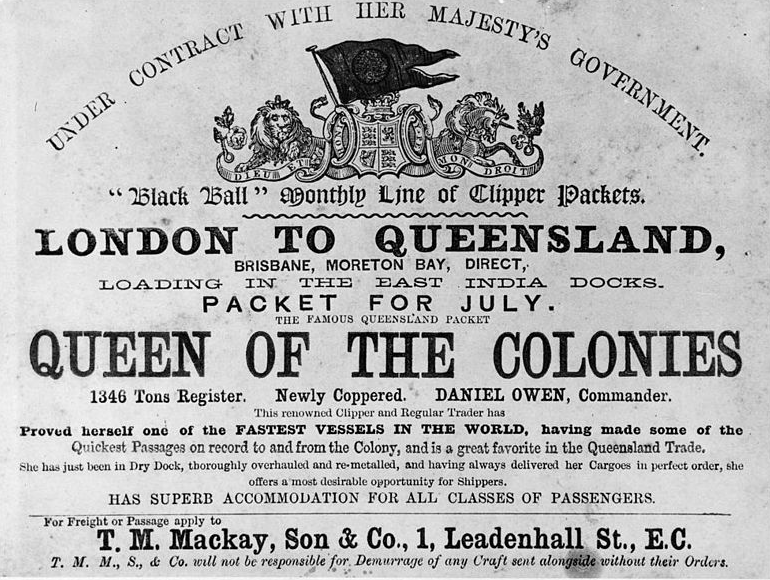 It was the rescue of passengers and crew from Immigrant vessel, the ‘Queen of the Colonies’ in 1863 that distinguished him the most. It seems that the Captain, 7 crew, 5 passengers boarded the life boat of the ship and rowed to Moreton Island on the 6th April 1863, where they buried the body of Mrs Barnfield near the lighthouse. On their return, the weather turned and blew them away from the main vessel and despite rowing all through the night, could not make it back The lifeboat was allowed to run with the current and wind and came to rest near Mooloolah. There they remained for a week, with very little food or water on the 14th decided to row south. Their boat was swamped by the ocean breakers and Mr Barnfield was drowned. Finally 3 of the boat’s crew decided to walk for help, and by the 18th, Captain Hill was reading prayers to all those remaining in the camp, who had laid themselves down, despairing of assistance. ² And then…

Several attempts were made by the Water Police to institute a search for the missing boat when its loss was reported in Brisbane; but for some time a furious south-westerly gale, which lasted for nearly ten days, together with a very heavy sea, prevented the steam-tug Brisbane from putting out to sea. Mr. John Macdonald, who was then inspector of Water Police, at length started in his boat, manned by five men, to discover if possible the fate of the boat and its crew … Mr. Macdonald and his crew had a very narrow escape from being wrecked on the reef outside Bribie Passage, the existence of which reef was unknown to anyone on board his boat. Bribie Island was first searched from end to end fruitlessly, and the party then landed on the mainland at the spot where Mr. Bulcock’s jetty now stands.

Their provisions, however, by this time had been completely destroyed by salt water, and the men, being hungry, fatigued, and footsore, commenced grumbling. They were therefore told to remain by the boat while Mr. Macdonald, accompanied by one of the men named Campbell … continued the search along the coast. At last they discovered the castaways camped under a few bushes on Big Caloundra Head, not far from the lagoon which, although now salt, was at that time a freshwater lake. All the party being practically without clothes had suffered terribly from exposure to the sun and the weather. They had lived for a fortnight on nothing but limpets and water, and while all were hopeless and despairing, many were delirious and in the last stages of exhaustion.

The chief officer (Mr Edridge), the fourth officer (Mr Grant), and Lieutenant Durant had been away for two days, and had not returned when Mr. Macdonald found the others; but owing to the state of the survivors he felt compelled to remove them at once, leaving a pencil notice on one of the trees close by, saying that he would either return himself or send immediate succour. All the relief that Mr. Macdonald was able to administer to the shipwrecked crew was the contents of a flask of brandy, which amounted to a tablespoonful apiece. After great difficulties, owing to squally and rainy weather, Mr. Macdonald, with the rescued people, got to Toorbul Point, where the steam-tug Brisbane was seen about half way over to Humpybong with steam up.

Mr Macdonald attempted to go out with the whole party, but found it was impracticable, as the gunwale of the boat in its heavily loaded state was only about 2in from the water. He therefore put back and landed the majority on the mainland, taking with him only three of the sailors of the lost boat’s crew. After a very hard pull for a considerable time they were at last seen by the people on board the tug, which at once ran down to meet them, and took them on board. Mr. Macdonald then having obtained a fresh crew from the tug returned to the mainland and brought the remainder safely on board, and next day they were all landed in Brisbane.

Subsequently, Mr. Macdonald obtained another crew, and a larger boat, and, within a couple of hours of his arrival in Brisbane, went in search of the three men still missing. He found them on the same spot where the others had been discovered, completely exhausted, having lived for sixteen days almost in a state of nudity, on nothing but shellfish and water. Their wants were immediately relieved, as on this occasion Mr. Macdonald had an unlimited supply of provisions and other necessaries. A pandanus tree, mentioned above, still stands close to the place where they were found marked, with the name of the ship deeply cut into the trunk by one of the shipwrecked crew. It was recognised and identified a few months go by Mr. Macdonald, who took his friends straight to the tree, though he had not seen it since 1860.

Mr. Macdonald, who lately was superintendent of St. Helena, was for his services on this occasion presented with £100 by the Government, and also with a tea and coffee service valued at 100 guineas by the agent and officers of the Black Ball Line. ³

Next time you’re in Caloundra, grab a coffee. Head to Queen of Colonies Drive, find the monument there and sit by it. Picture our bedraggled survivors on the beach below and raise you cup in thanks that limpets are not on your lunch menu.

5 thoughts on “Superintendent, Inspector, pioneer and rescuer of shipwrecked survivors”