100 years ago, Frederick McMunn became the 13th St Helena Penal Establishment prison warder to die whilst employed on the island. Though he lived on St Helena Island at the time of his death on the 21st October 1920, he died in hospital in Brisbane. (1) Frederick was a prisoner warder, a miner, a bachelor and a unionist. He was also brother and brother-in-law to Charlotte and Robert Murrie, whose lives and story we have been exploring in our ‘100 years ago’ series.

Frederick was one of 10 children born to William and Albina Holmes. (2) The McMunn family moved from New South Wales to Brisbane in around 1865, where daughter Charlotte McMunn, the future Mrs Robert Murrie, was born in 1866 and Frederick was born in 1869. (1)

Between 1903 and 1908 (4), bachelor Frederick joined other hopefuls heading to North Queensland in search of rich rewards from mining. Frederick was living at Emu Creek, where around 200 men were on the fields in 1904. Working in the areas of Fossilbrook and Kangaroo Hills, it is not specifically known what Frederick was mining, though the area was known for deposits of the ore Wolframite, tin, gold, silver and a variety of other minerals.

Still, it appears that Frederick was successful in his ventures and he was able to leave to head to Brisbane in August 1908.

Those friends of Mr. Fred McMunn who knew him when he was working on Oakey Creek (Kangaroo Hills), will be pleased to learn that he dropped on to a fair patch some little time ago. An old friend of his, writing from the Oaks, sends along the intelligence that Mr. McMunn, having been bequeathed the tidy amount of £10,000, left Fossilbrook on the 3rd August for the south. (5)

No doubt the connection with his brother-in-law Bob Murrie, already working on the island as a warder, would have assisted in his efforts to gain employment. The two men would have shared lodgings in the Warders’ barracks, eaten and socialised together, potentially relieving the monotony of life on an island far removed from family and the ordinary leisure activities available to others.

Still, personal connections can at times be an issue, especially when one man holds a more senior position and needs to charge the other with a neglect of duty:

Feb 23 1917 With giving a miscount of 2 prisoners short of the number he let out between 3:30 and 6:00am. Charged by Chief Warder, plead guilty. Cautioned – Superintendent Ryan.

The arrival of Fred’s sister Charlotte and her children to live on St Helena Island in 1913 meant that Bob moved out of the barracks to live in a married cottage on the island. As a neighbour and uncle, Fred would have enjoyed living in close proximity to the family for many years. It would be nice to imagine that Bob Murrie, Charlotte and Fred McMunn held a close bond and that Charlotte’s second son Fred was named after her brother Fred. Fred McMunn, did not marry and had no children of his own.

Frederick was a long-term member of the St Helena Rifle Club, which was a long standing club of great importance amongst the warders. This would have offered an important recreational outlet for Frederick in these years including chances to compete in competitive matches (7)

Teams from the Brisbane and City of Brisbane rifle clubs proceeded to St. Helena on Saturday to try conclusions with the St Helena Club. The match resulted in a win for the City Club, who finished 27 points ahead of Brisbane, and 17 ahead of St. Helena. Scores (Total)

As a warder, Frederick was often charged with miscounting prisoners into or out of their wards and as a rifle club member he was not the team’s crack shot. But his greatest contribution to his fellow prison warders was his leadership in creating the very first prison officers’ union. 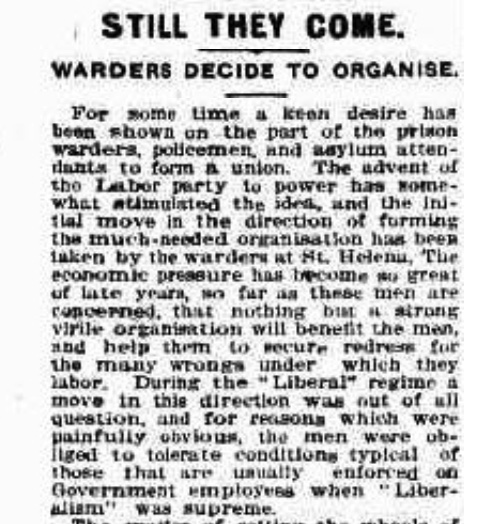 In 1915, warders began to take matters into their own hands in an effort to “secure redress for all the many wrongs with which they labour.” (8)  A meeting was held in the billiard room on St Helena, electing St Helena P.E. warders the following positions:

The men were hopeful that they would create a union combined with Policemen and Asylum workers and set to drafting a constitution.

… will long be remembered by the employees of the Prisons and Asylums of Queensland as a “red-letter” day in the onward march of the long-suffering workers of these institutions, when, at the Trades Hall, was definitely formed the Prison and Asylum Employees’ Union.

Mr. R. Champ, who has been instrumental in getting the employees of these Institutions together, welcomed the delegates, and stated that he was more than repaid for this work by seeing that his efforts had been successful.

There was a large attendance of delegates. Mr T. Parker (Goodna) was elected chairman and Mr. M. Mogan (St. Helena) secretary. The following delegates represented the various institutions: A. Crease (Boggo-road), F. McMunn (St. Helena) … The conference then proceeded to draft the general rules which will be forwarded to the Industrial Registrar for approval…

The objects are: (a) “To assist kindred unions financially; to provide for the acquiring of property, and to do all things conducive to the welfare of members and the working-class organisation,

(b) To avoid cessation of work at all times, as far as possible, the safety of the community in general making it necessary that the members of this union remain on duty.”

…The results of the conference are highly satisfactory, and the union looks forward with confidence to a long and useful future.

By 1918, they were negotiating for improvements in rations, wages and leave. (10) Frederick Mc Munn had begun his prison career on a wage of £100 per annum on probation, which increased to £120 p.a. as a permanent member of staff. (6) Negotiations included a wage of £160 p.a. for men and £100 p.a for women and an increase in food rations, of which the men’s pay increase was considered favourably. (10)

Frederick was still employed as a warder on St Helena Island when he died at the Mater Misericordiae Hospital, Brisbane on the 21 October 1920 and was buried in the South Brisbane Cemetery the following day. (12).