“In the going down of the sun and in the morning… we will remember them.

Remembrance Day on November 11th 2018 marks the end of World War 1 in 1918. Trouble was, in 2014 my colleague Ranger Daley Donnelly and I had asked ourselves the question “What men?” when it came to remembering Warders in the St Helena Penal Establishment who were also soldiers of war.

Anzac Day 2017 brought back a determination for me to solve this very question. Given we were exactly a century after some of the worst battles on French soil in ‘The Great War,’ it seemed a timely moment to uncover any members of the St Helena Penal Establishment’s warder community who were involved in World War I overseas in any capacity. And with 11th November 2018 looming, I would like to devote November’s blog posts to the St Helena Warders and will create a memorial eBook a the end to finally remember them in perpetuity.

To date, answers had proven to be elusive. But there they were. Men, young and old willing to resign their position as warder on the island in 1914 and 1915 to stand with fellow countrymen, fight for the Mother Country and put their lives on the line for all they believed in.  Some were given the promise of a return to their position upon return. Other had ulterior motives. Yet more soldiers returned from the battlefields to take up new positions as warders on St Helena Island as part of a Qld Government scheme to repatriate returned ‘diggers.’ 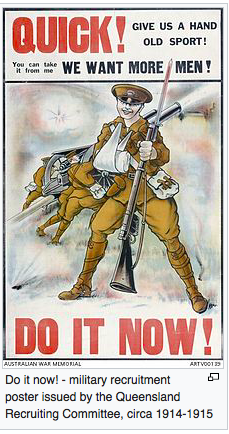 When war broke out, many men felt the need to answer the call. Some avoided the call up at all costs.  One St Helena warder was called up to be ready for duty, but chose to apply for an Exemption. Michael Mogan, single and 30 years old, arrived at St Helena as a new Probationary Warder in July 1912. ¹ His conduct was good and he was promoted to Warder Clerk on the 18th August 1916. Only two months later, he arrived at the Exemption Court in Sandgate on 23rd October, applying for exemption from enlisting in the war. ² 14 men applied for exemption that day, on the grounds of the need to support aging mothers or family, having other brothers already enlisted, a need to organise their affairs, or for being only sons. Mr Mogan applied on the grounds he was a warder, for which he was granted an exemption.

Australia stood alone in not enforcing conscription in the Great War. Government and communities generally supported the war effort and volunteers continued to enlist throughout the early war years. But by mid-1916, enlistment levels for the Australian Imperial Force were at an all time low, despite a large recruiting campaign begun in November 1915. It is thought that a large number of men, approximately 45%, did not volunteer.³ Prime Minister Billy Hughes wanted conscription, but knew that opinions ran high on the subject of conscription in the general public and that it remained divisive.

Mr Hughes brought the decision to the people via a plebiscite on 28 October 1916, hoping to garner symbolic public support without risking the future of his Labor Party.  Before the plebiscite date, believing that that referendum would pass, Hughes also ordered that all men between the age of 21 and 35 would report for medical checks and military training in order to be ready for military service once the ‘YES’ vote was secured.

Exemption Courts were established in each state, allowing applicants to request exemption due to medical issues, employment in key industries or conscientious objectors. More than 87,000 men sought exemption from the military service through exemption courts. ³ It was thought that the call up of men to prepare for war before the vote was decided was one of the factors that resulted in the public’s choice of ‘NO!’ to conscription.

Warder Mogan returned to St Helena P.E. as Warder Clerk and was also the General Secretary of the Prison’s Employee’s Union. This saw him at the Arbitration Court on the 4th December 1918 speaking on behalf of a petition by the Prison Employees of the South Eastern Division aimed at increasing the rate of pay, rations and leave entitlements. ⁴ Prison warders at this time were employed at a rate equivalent to the minimum wage, being £150 for first year male warders and £96 for female warders. Michael Mogan spoke on the subject of rations, which at £24 per annum held very little real value to warders who had to maintain homes both on the island and in Brisbane, where they were only able to spend 7 days a month. While Mr Justice Macnaughton agreed to increase the male warder’s wage to £160 per annum, the female warders’ wage, as well as ration and leave entitlements remained the same.

Promoted to Warder Clerk, Storekeeper and Telegraph Officer in 1920 ⁵, Michael Mogan was one of the many warders, including ‘digger’ warders, removed from the island in 1921.  But that’s another story for another day.