That would be Grandpa’s place on the island… I think it was to the side of the prison. Grandpa used to come up from the prison and we’d go down the road to meet him…Aunty Grace used to take us to Wynnum every Saturday and get ice-cream.

Nell Pearce was born in 1916 and was only a young girl when she spent her holidays on the prison island of St Helena. She was an older woman by the time she was interviewed in 1987 by Archaeologist Yve Reynolds, who was trying to build a picture of St Helena Island by piecing together personal memories and photos.  Her memories were a typical 4 or 5 year old’s:

All I know was that I was a little girl who used to go and visit Grandma and Grandpa in the holidays and have a beaut time. I used to go fishing and the boys, Graham and Reg, were mad at me because I caught a fish and they didn’t.

The Pearce family were descendants of David Graham, Warder, Chief Warder and Acting Superintendent of St Helena Penal Establishment. A family photo album contains beautiful images of Nell and her cousins amongst the flower beds, riding her tricycle, and around Warder’s Row where David and his wife Mary Ann lived. This photo album, now known as the Fiona Pearce Collection, has provided some of the most important images of the prison in the 1910’s and early 1920’s, just before the prison began to be downgraded to a prison farm.

Following the posting of the eBook The St Helena Island Warders’ Children’s Cemetery a few weeks ago, I was contacted by Lyndell, a descendant of David Graham through his son, James Findlay. She remember her Aunt Grace, David Graham’s third daughter, speaking fondly about her time on the island and made contact with us. I provided her with a Warder’s Profile last week, containing all I know at this time about her family and she has found it has reignited some of her own memories.

Here’s the Graham family profile – all you need to do is click on the link and it will open the full document up for you. It’s an interesting read!

A number of profiles have been given out when a descendant has contacted me, chasing down their family connection to St Helena Island. The posting of my blog post When death changes history stirred quite a conversation between a number of people in the community all connected to Elizabeth Crompton. Our conversations helped to combine their personal knowledge and my island knowledge to build a profile that I was able to share back to them and also share on this blog. I have also recently created profiles Warders Henry Clements and Edwin Cloherty  after contact with their descendants that I might share over the next few posts, as they are both interesting families with great stories to tell.

If you have an ancestor that spend time on St Helena and would like a profile, head over to the contacts page and get in touch! It’d love to talk with you and build a detailed picture of the fascinating people who created the St Helena Prison Community. 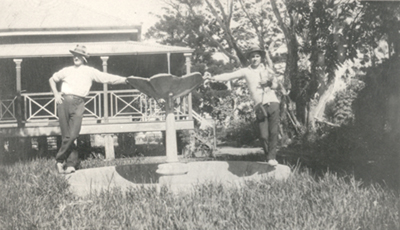 One thought on “Profiling Grandmas and Grandpas”