Not all soldiers return from war. In fact 62,000 Australian soldiers did not return home once the guns fell silent at 11am on the 11th November 1918. I’d like to lay tribute to Warder John Mitchell on Remembrance Day 2018. He is the only St Helena Island World War I Warder/ Soldier who did not come home. But his death – nowhere near a battlefield and not at the hands of the enemy – is one that tells us a very deeply moving story about the strange world soldiers found themselves thrust into, and the fear felt when returning to an old life as permanently changed men.

Originally called Armistice Day for the signing of a document to herald the end of fighting, Remembrance Day 2018 allows us to contemplate this period of history from the comfort and distance of 100 years and half a world away. All of us have our own response to The Great War – pride in a brave fight for freedom or sadness at a waste of young human life. Personal pain at a relative that was caught up in and affected by a global war or a lack of connection to a time of British Empires, fervent nationalism and sacrifice. The individual stories of the St Helena Warder Soldiers paint a very personal account of a social history that affected everyone in society.

John Mitchell was a local man, born and bred in Brisbane, who had worked for 5 years as a Brushmaker whilst also volunteering as a member of the Garrison artillery, before his appointment at age 25 as Probationary Warder at St Helena on the 31st July 1913. This was not an accidental career path, as he was following in the footsteps of his father, John Henry Mitchell who was a long term warder at the St Helena Penal Establishment from 1898 until he was transferred to Brisbane Prison in 1912. John Mitchell Jnr established himself at St Helena Penal Establishment with no major issues, excepting one misdemeanour of going on armed duty without arms or ammunition, to which he plead not guilty and the case was dismissed. 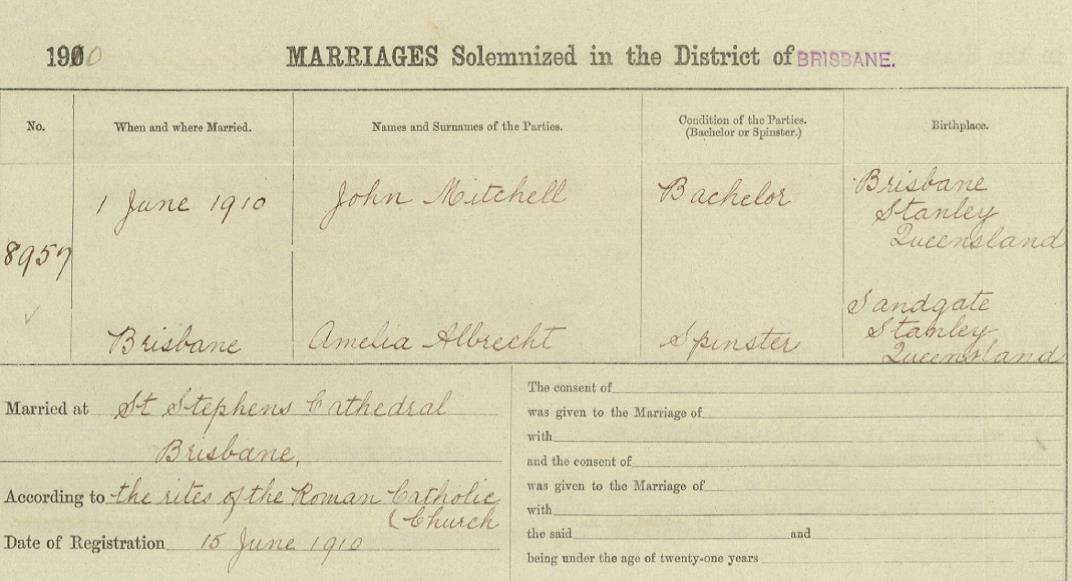 John Mitchell had been married to wife Amelia for 3 years by the time he arrived at St Helena in 1913, wiht a 2 ½ year old son, William. His second son John was born in 1914. But on the 2nd December 1915, John made a decision that altered the course of his life – he resigned his post of warder. And on the 3rd December 1915, John Mitchell enlisted in the Imperial Armed Forces, Number 20845, attached to the 33rd Battalion, 9th Field Artillery Brigade as a Gunner.

John embarked from Sydney on the 11th May 1916 aboard the ‘Argyllshire’ for England. He received promotion as a bombardier, but by the end of 1916 he was admitted to Fargo Hospital with bronchitis and again in May 1917 for an abscess of the face. On release from hospital he was attached to the 32nd Heavy Artillery Group Stowlangtoft, RBAA Larkhill and headed for France on 5th August 1917. By October he had rejoined the 12th Mobile Army Brigade, Australian Field Artillery as a Bombadier and by 5th April 1918 was promoted as Corporal. Yet this rise was not to last, at John’s own request. A handwritten letter on the 23rd May 1918 states that he wished to revert again to the position of Bombadier. 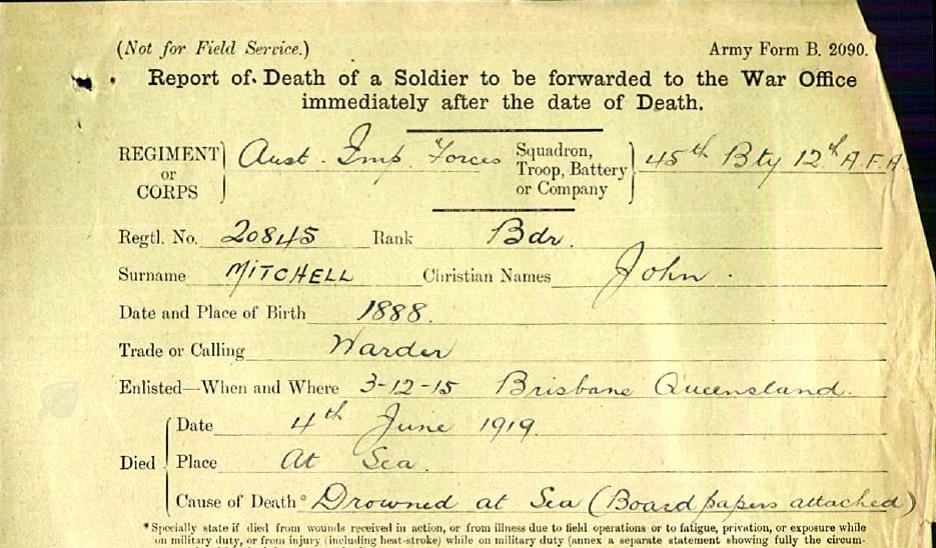 It was not until 11th May 1919 that John Mitchell embarked for Australia aboard the ‘Borda.’ Having survived many years of campaigns during the war, and despite all that he seen and done to survive, he was finally destined for home. But he never arrived. On the 4th June 1919, John Mitchell was drowned at sea. There are many accounts of what occurred that day, but these are all observations and assumptions. Only John really knew what happened.

This sequence of events was recorded:

A man was seen tumbling over the railing. His tunic, hat and shoes were left on the deck. People saw him standing on the railing and then fall over.

3 Lifebuoys were thrown in with flare and landed approx. 30 yards away

Man appeared to be treading water but people lost sight of him within minutes.

Boat turned and circled the area for about half an hour

Body was seen floating just under the surface of the water.

John Mitchell was described as a capable, conscientious and reliable soldier who was exceptionally good man in action. A very reserved man who kept to himself, of sober habits. One man knew him at Codford and had remarked previously that he had a ‘strange manner’ as he had on that day also. Another said he began to act in a peculiar manner just prior to embarkation for the journey home.

He appeared to be looking forward to returning home to his wife and 2 sons, yet many people who knew him agreed he looked to be worried about something unknown. Unknown to others, his A.I.F Demobilisation Form asked if there was a need to return early. John answered yes, ‘on account of domestic troubles.’ 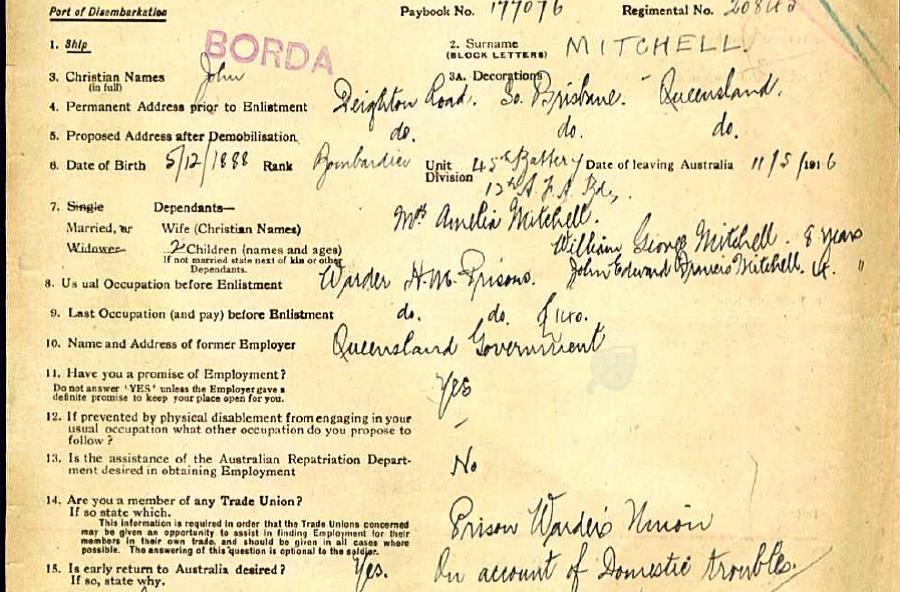 On the boat on the day he died, other men described him as ‘dazed’ and appearing drunk, through all agreed he was ‘of sober habits’ at all times. John stopped one man to ask ‘if there were any chinamen on board’ and also where the hospital was. To another man he asked how far they were from land, and when the Sth African coast was pointed out replied ‘I think I’ll go there.’ He was directed to the hospital dispenser and though he went there he did not actually see the doctor. He went overboard half an hour after leaving hospital.

What is not known was why it happened. One witness said ‘he could not say what caused the man to fall over.” The official Findings read:

It was impossible to tell if it was deliberate or and accident.

That the mind of the deceased was temporarily deranged

That the ship’s crew tried everything to recover him.

Physical injuries were a life-long legacy for many soldiers caught up in the fierce fighting of World War I. Psychological and emotional trauma and illness was to prove equally devastating, but less obvious and less acceptable in society. The level of pain and worry experienced by John can only be guessed at, but after 3 ½ years of war and to be so close to being back home, it was obviously overwhelming.

John Mitchell is remembered at the  Villers Bretonneaux memorial, France.