Benjamin Rudhall wasn’t a World War 1 soldier, because he died in action over a decade earlier. As we approach Remembrance Day on November 11th 2018, it seems an opportune time to remember all the Soldier Warders on St Helena Island, including those who fought in the Boer War. Benjamin Rudhall fought and died at Amersfoort, Sth Africa in 1902 and the ripple effect of his death had drastic consequences for his family.

The Boer War was essentially a clash between British imperialism and Afrikaner nationalism. This had simmered and erupted throughout the bulk of the 1800’s and by 1899 Britain sought the unification of whole of South Africa under the British flag. The existence of the two Boer republics – namely the South African Republic (Transvaal) and the Orange Free State – was a thorn in the side of this ideal. The two Boer republics wanted to preserve their independence and were not prepared to become part of a united South Africa under British authority. 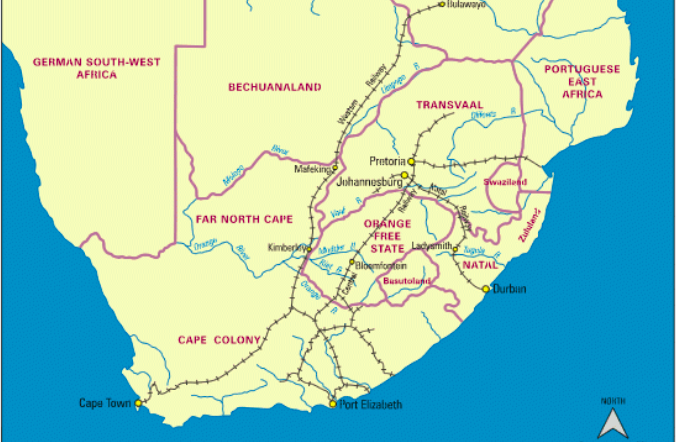 Initially in 1899, the mobile Boer command were successful in attacking British forces in many areas, but the beginning of 1900 saw the British troops begin to turn the tide thanks to the arrival of reinforcements. Australia sent a total of approximately 16000 soldiers to join the British War effort, and Queensland sent over 2,100 troops between 1899 and 1902. Benjamin, (born Barnett) Rudhall had already served over 10 years with the 2nd Dragoons in the British Army, discharged in 1882 (1) so he was an experienced and willing soldier ready to enlist again in his new country of residence, Australia.

In fact, Benjamin and his new wife Annie, whom he had married in December 1883 in Staffordshire, England (2) had immediately emigrated to Australia, giving birth to their first child Alice not long after arrival in Queensland in 1884. Keen to start a new life and family with his new wife, Benjamin and Annie settled in the Red Hill area, where Annie gave birth to a further 7 children and Benjamin found work as a drayman. (3) But sometime in 1889 or 1890, major changes began to take effect for the Rudhall family.

Benjamin found employment as a Warder at the St Helena Penal Establishment. At St Helena, Warder Rudhall was at the receiving end of a  well-known troublemaker, Walter O’Hara.

2ndly with disobedience of orders in not leaving such tea between the gateway when ordered to do so, but throwing same away and at the same time using Insolent language to Warder Rudhall

The Rudhall family remained in Brisbane at this time, where Annie gave birth to twins Thomas and Arthur in July 1890. Both of them died in September 1890, a tragedy already experienced by the family with the death of another baby, Eva, in 1888.(3) Finally, Benjamin also had to leave his position as warder at St Helena Island, due to the fact that his wife, Annie, was ill with Tuberculosis.

Despite all of this, Benjamin Rudhall enlisted with the 3rd Queensland Mounted Infantry, who embarked from Australia on the 2nd May 1900 to fight in the second phase of conflict in South Africa, a major British counter offensive aimed at taking all major towns and cities. From April 1900 to 1901, Benjamin and the 3rd Queensland Mounted Infantry successfully fought in Rhodesia, West Transvaal and in northern Transvaal. He returned from active duty with the 3rd contingent in June 1901. (5)  But then, despite experiencing disease epidemics, lack of food supplies and harsh, unrelenting conditions, Benjamin Rudhall enlisted again and went to the Boer War twice.

Benjamin only had a 2 months with his family in Kelvin Grove, with his youngest child George turning 6 years old and his wife very ill with Tuberculosis.  He re-enlisted as No. 604, 6th Queensland Imperial Bushmens’ Contingent Service leaving Brisbane for Capetown in August 1901. The 6th was another mounted infantry, but by this time the war had changed tactics, becoming largely a guerilla conflict. Troops were involved in raids on farms and towns, rounding up families and occasionally fighting small contingents of Boer fighters. They trekked many hundreds of kilometers and suffered from exposure, a lack of bathing and consequently, lice.

Benjamin and the 6th Imperial Bushmen were concentrated around east Transvaal near the Natal border and it was here that he was killed in action.

Private Rudhall and fellow soldier Trooper Thomas Flint were captured by the Boers on 3rd February 1902 following an attempt to capture a Boer convoy near Amersfoort. They had become separated from the rest of the contingent and were ambushed and shot at ‘grass kopf’. Benjamin was killed on 3rd February, 1902 and is buried in Amersfoort Old Cemetery (5)

Since writing last two of our men have been killed – Benjamin Rudhall, of Brisbane (late of the third contingent), and Thomas Flint, of Mount Mergan (also late of the same contingent) – and it caused quite a gloom amongst our little band for a few days, as they were both good mates in every way. (6)

On 31 May 1902, a little before midnight the peace treaty of Vereeniging was signed in Pretoria. By 54 votes to six the representatives agreed to surrender their independence and to recognize the authority of Edward VII. But the effects of war are always far reaching and continue to be felt long after the fighting has ceased and the politics are drawn up.

Benjamin received the Queens South Africa Medal and both Thomas Flint and Benjamin Rudhall are listed on the plaque of names of the Brisbane Boer War Memorial in Anzac Square. Seven months after Ben died, Annie died of Tuberculosis on 23rd September 1902, leaving their remaining 5 children orphaned and without family in Australia.

RUDHALL.—In loving memory of our dear father, who was killed in action at Amersfoort, South Africa, February 3, 1902.

Weep not for me my children dear, I am not dead, but sleeping here;

Mourn not for me, nor sorrow take, But love each other for my sake. (7)

The struggle to survive for all the children is highlighted in the story of their third daughter, Violet.

In September 1907, she took Hugh McDonnell to the Summons Court for confinement expenses.

Violet was living in Red Hill at the time and in March had been working as a maid of all work at the Red Hill Post Office where herself and Hugh had been seeing each other. She discovered she was pregnant in May and initially Hugh had said he would keep the child and marry her. He had given money for a wedding cake, baby clothes and a ring, but then went out of work and this did not occur. The court ruled Hugh to give 5 shillings per week to Violet. (8)

And finally, despite his father’s death, George Rudhall enlisted in the First World War in November 1915. (9)