Strength of character often means having qualities such as resilience, determination, consistency, focus and passion. If this definition is applied to many of the prisoners within the St Helena Penal Establishment, many of them clearly display strength of character. Prisoner Walter O’Hara had all the above qualities, giving him every opportunity in life.

I believe if Prisoner Walter O’Hara’s drive, tenacity and determination was funnelled into positive contributions in society, he would have had quite a large and successful career. Unfortunately his only ambition was to ‘outdo the doings of Ned Kelly’ and he used every bit of passion, resilience, focus and consistency to create ongoing havoc in society and in prison. Walter was a force to be reckoned with. 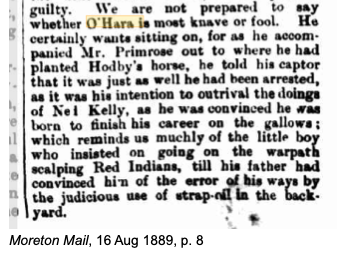 When Walter O’Hara was imprisoned at St Helena Penal Establishment in 1889, it was his 3rd time in jail. This time he was sentenced on the 20th August 1889 to 2 years Hard Labour for horse stealing and arrived on the island on the 10th Sept 1889. ¹

It took 5 weeks for him to be sent to 48 hours Solitary Confinement for quarrelling with Prisoner Finucane and in December of the same year he was again in Solitary for fighting in the Tailor’s workshop. This set the scene for 1890. From February 20th to March 19th he was reported 5 times for fighting and insolence to warders. His cell became his battleground in March and April:

April 8th Singing in his cell and refusing to desist and Insolence to Warder McNamara – 4 days close confinement on half rations.

April 23 Talking in his cell and refusing to desist and Insolence to Warder Langtry.   4 days close confinement on half rations. ¹

It is obvious that Walter had a set course in mind and he was using the little resources he had – his mind, his mouth, his fists and his wit – to the greatest effect. Walter had a disregard for rules and regulations, no empathy with fellow prisoners and a contempt for those in authority. He worked alone with little need for conspiracies with other prisoners or to be part of a larger gang or group. He was also young and fit, needing only days on release from Solitary Confinement to regroup and begin his next campaign.

He outdid himself over 4 days at the end of August 1890. His appearance on the 2nd September 1890 before Colonel J.D.R.Ross and R Gailey, JJP, saw Walter O’Hara charged for 18 infractions:

2ndly with disobedience of orders in not leaving such tea between the gateway when ordered to do so, but throwing same away and at the same time using Insolent language to Warder Rudhall.

7thly with singing whilst in a Probation Cell at last named time and date.

8thly with Disobedience of Orders in refusing to desist when ordered to do so.

9thly with Disobedience of Orders at 4.30pm in refusing to put on his coat when being taken to the office on the preceding charges.

10thly With Disobedience of Orders in refusing to go back to his cell after being dealt with in the office on the preceding charges and laying down in ‘A’ passage thereby necessitating 2 warders carrying him into his cell, he resisting them the whole time.

11thly with Disorderly Conduct after being so carried into his cell, by continuously hammering with some article against the cell door, thereby disturbing and interrupting the evening muster of prisoners. Making a false charge against Warder McGinley.

12thly with Disobedience of Orders at 6.45am on 31st August 1890 in refusing to take water into the Probation Yard to wash himself with.

13thly with Disorderly Conduct in his cell at 7:30am on 31 August 1890 by singing during morning muster of prisoners.

14thly with Insolence and Insubordination in refusing to answer the Superintendent when questioned by him at 10.00am 31 Aug.

Disobedience of orders in persisting in such conduct, although repeatedly ordered to desist, and not desisting until the gag was applied to him.

Insolence and insubordination in speaking to the Supt in an insolent manner and refusing to answer him when questioned at 11.55am.

1st Sept Disorderly Conduct by singing in his cell at 5.25pm¹

For all of the above crimes, Walter received the punishment of 12 lashes, ordered by the Visiting Justice R. Gailey JP. Lashes on St Helena had been administered since 1867 and continued to be administered right through the 1890’s at both St Helena and Boggo Rd Gaol. Few details are available about flogging details on St Helena Island, but below are details from a flogging administered at Boggo Rd Gaol in 1888, to another ‘incorrigable’ prisoner Joe Lamb, who had also spent time on St Helena at the same time at Walter O’Hara:

…sentenced to 20 lashes, and these were administered by the public flagellator on Wednesday morning. The prisoner submitted quietly while he was being fastened to the triangle. Canvas bandages were placed around his loins and the nape of his neck, in case of his being struck accidentally in these parts. The flagellator delivered the blows in rapid succession and with considerable force…

At a time when discussions regarding punishment versus reform were beginning to emerge, Walter O’Hara certainly challenged the system and the authorities. The use of the gag and flogging were beginning to be questioned as whether they constituted torture rather than punishment. After the turn of the century, punishments such as loss of indulgences or ‘light’ solitary cells rather than the ‘dark’ cells were more often used. Incentives such as reduced sentences were also offered to reform prisoner’s behaviour.

Regardless, Walter O’Hara remains the prisoner with the longest rap sheet, and one who I believe received every form of punishment available to the gaol authorities. These punishments made no difference. Walter O’Hara was in gaol from the 1880’s right through until the 1920’s. No amount of punishment or reform was to stop him from achieving his goal of being ‘Queensland’s Ned Kelly.’ I’ll leave you to be the judge of his success in achieving this goal.