The symbolisation of the might and power of Napoleon Bonaparte the first was on display in all its glory recently as I stood at the Arc de Triomphe in Paris recently. Built during Napoleon’s reign (1804 – 1815) to allow a triumphal procession down the Champs-Élysées, it stands the test of both time and hundreds of thousands of tourists clambering to the top every year. Strangely, Napoleon Bonaparte has a lot to do with the history of St Helena Island, Moreton Bay.

Proclaiming himself Emperor, Napoleon Bonaparte 1 fought a seemingly endless series of conflicts during the Napoleonic Wars from 1803 to 1815 with victories against the Russians, Austrians, Prussians, Spanish and Portuguese. In the Louvre in Paris I spied the 1808 painting ‘Napoleon on the Battlefield of Eylau’ by Antoine Jean Gros, which portrays him as a valiant but caring leader, on the ground with the foot soldiers leading them into battle and by their side as they suffer injury and harsh conditions.

But there were also losses, at the Battle of Trafalgar, the Russian invasion of 1812 and the battle of Waterloo in 1815 in what was then the Netherlands but today is Belgium. Fighting against the Duke Of Wellington commanding British forces and also the Prussian army, Napoleon’s loss spelt the end of his reign in France. He was eventually exiled from France to a small island off the African coast, named St Helena Island.

The other St Helena Island on our earth has only held that name for less than 200 years. For the local Indigenous people speaking the Jandai language in and around Moreton Bay, this island is always ‘Noogoon’ or ‘Nugun.’ Translated as ‘Place of the Flying Fox (gramman)’ it was a very apt name, being a favoured hunting site for local Quandamooka men in Summer, when the bats flocked to the forest on the island to feast on fruits from the forest trees.

A story needs to be inserted into these facts at this point. Is it historically accurate? Is it completely mythical? Interpreters, historians and tour guides rely on our St Helena Island’s naming story holding some grain of truth as we retell it. I hope you will do the same. 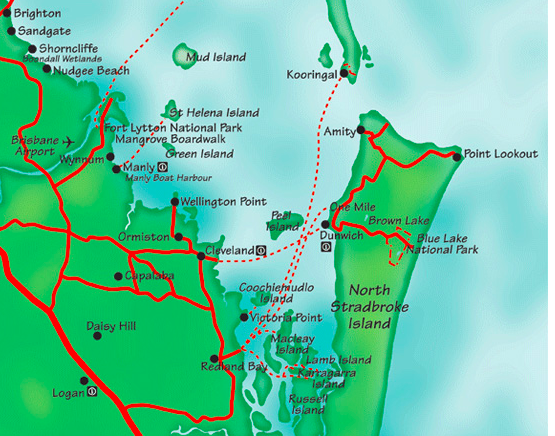 The naming story starts on Minjerribah (North Stradbroke Island) in Moreton Bay, where a local Aboriginal man stole an axe in approximately the 1820’s. For this he was exiled to a smaller island as punishment, and the chosen island was Noogoon. Now this man obviously had a tribal name, but oral history only tells us that he had been nicknamed ‘Napoleon’ for reasons unknown. Under this moniker he was exiled and the island he was sent to consequently received the most appropriate name French history could provide – St Helena.

The French Napoleon Bonaparte remained on his St Helena Island for 6 years and eventually died there. But Moreton Bay’s Napoleon had a vastly different outcome, having made a canoe from the local forest trees and rowing his way back to Minjerribah within a very short time. Regardless, the name St Helena remained.

Interestingly, other parts of the surrounding land and water are named for the same piece of French history – we have Waterloo Bay as the surrounding water in that part of Moreton Bay, Wellington Point just to the South and Trafalgar St at Manly where the jetty stands. It was not until 1842 that Robert Dixon named Waterloo Bay and Wellington Point, and his map of 1842 (below) shows that St Helena had already been named prior to this time. In trying to impress the Duke of Cleveland by naming Cleveland after him, Dixon perhaps felt that St Helena Island’s presence gave an opportunity for eternal commemoration of British victories through some well chosen names around the entire district.

Exile became a constant theme for many of the islands of Moreton Bay. St Helena, Peel and Stradbroke Islands were used as Quarantine stations to prevent new immigrants from bringing diseases to Brisbane. Peel Island was used also to exile those with Leprosy and Stradbroke Island’s Benevolent Asylum isolated many who were unable to care for themselves or who were a burden on society. St Helena Island remained the island of choice for 65 years as the best place to exile and isolate prisoners away from society.

2 thoughts on “What’s in a name? Napoleon and St Helena Island”