McDonalds are on St Helena Island. But wait! Before you vent your frustrations at the insidious creep of fast food into all parts of our landscape, sit back. I’m not talking about The Golden Arches. You see, last month one of the earliest residents, Alice McDonald nee Malcolm, returned to St Helena Island. Although she died there in 1881, it took until 2018 for her headstone to become part of her island home. 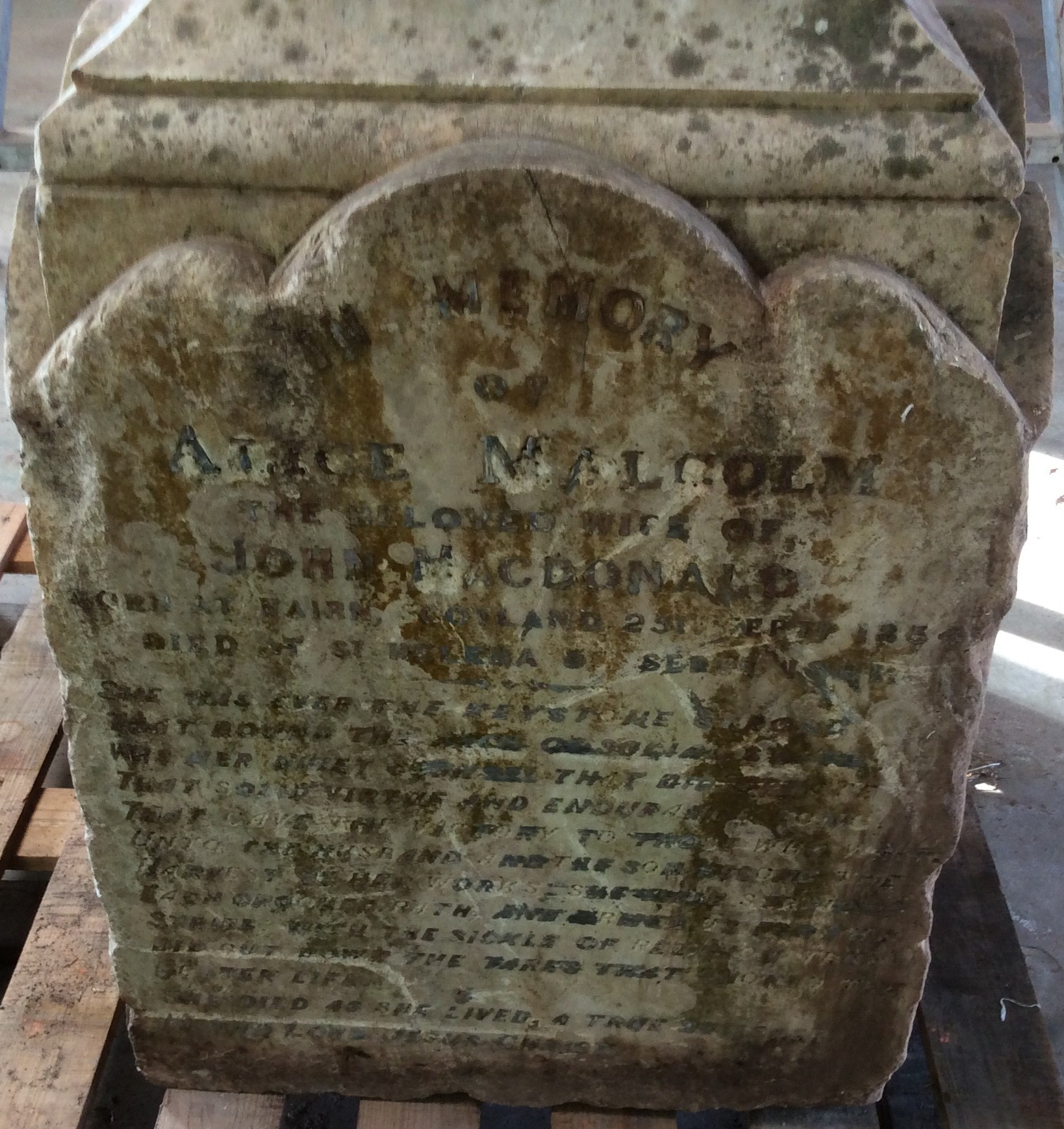 Actually, the whole McDonald Clan have journeyed back to St Helena Island, as they all appear on a very significant artefact – a headstone from the McDonald gravesite. This headstone has had an incredible journey before Qld Parks and Wildlife Ranger Daley Donnelly rediscovered it and hauled it across to St Helena. It’s an amazing find, as it encapsulates so much about St Helena’s history due to the 4 names upon it – Superintendent John McDonald, his wife Alice McDonald, their son John Malcolm and their nephew and later St Helena Superintendent John Alexander McDonald. 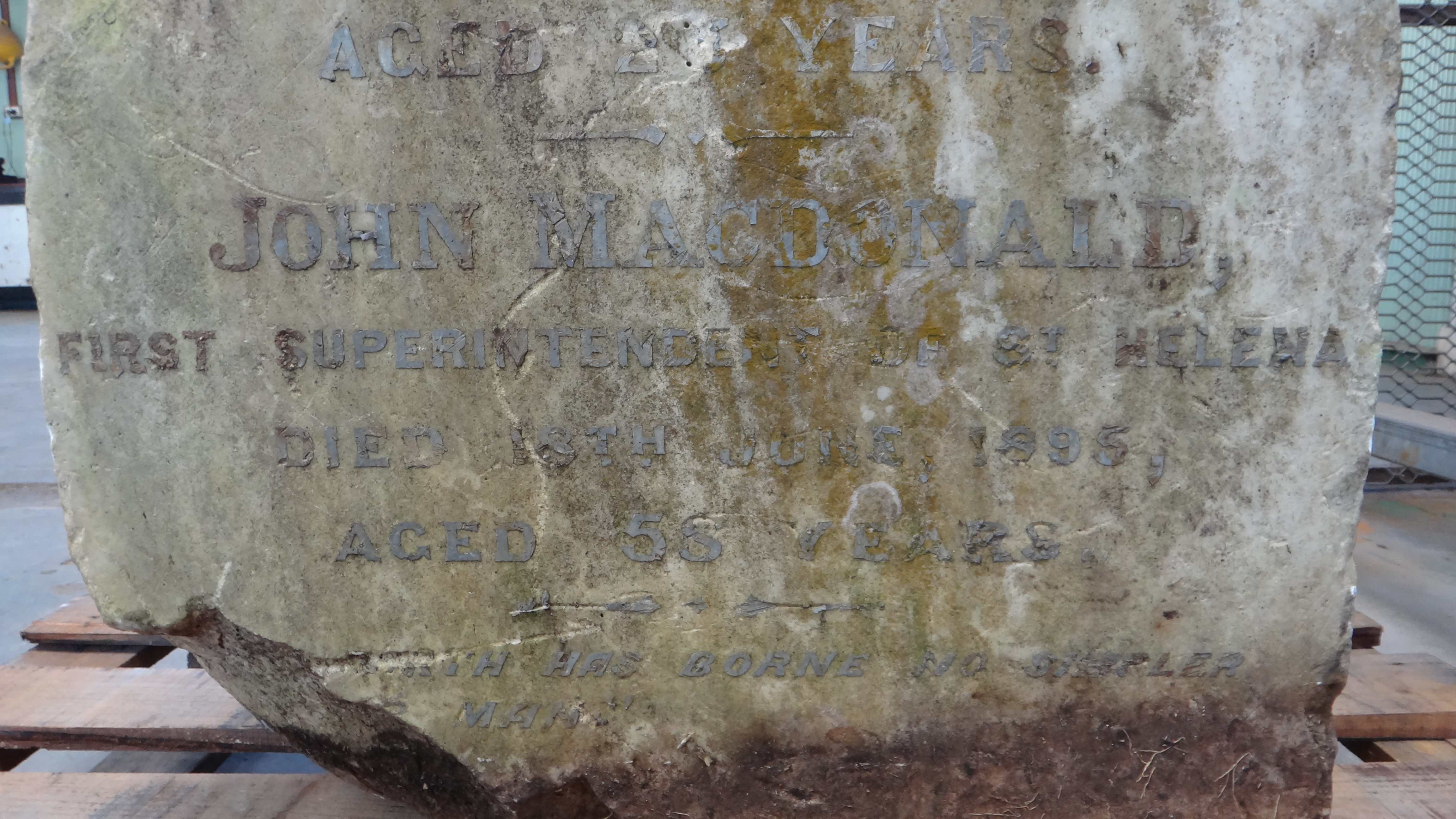 The McDonald headstone’s journey is all due to the fact that it was once located in Toowong Cemetery. By 1975, the cemetery was full and closed to all burials excepting family plots. At the same time, in the interests of converting it gradually back to an open space for the public, many hundreds of old or forgotten headstones were removed. The McDonald family plot had been utilised since Alice’s death in 1881 and continued until John Alexander’s death in 1924.

It was only due to the interest and effort of a member of the public that the headstone was saved at all and kept outside in a yard since the late 1970’s. There it sat overgrown with algae and foliage until an associate, Shirley Lambert, recognised the need to relocate it to a more appropriate place. By contacting Daley at QPWS, Shirley and a fair amount of muscle enabled the headstone to find a way to bring it to a place so significant to the McDonald family.

It’s definitely Alice’s monument initially, as her epitaph dominates the structure. Alice lived on the island for over a decade with her husband Superintendent John McDonald, whom she married in 1860.  Here, she created a home in the new Superintendent’s Quarters with an extensive garden and raised her son, John Malcolm, born in Brisbane in 1865. But unfortunately Alice became very unwell, to the point of John wanting to take her to Victoria for treatment.¹ She died on St Helena Island before she could receive this on the 8th September 1881 and was buried at Toowong. She is the only Warder’s wife to die on the island. (2)

Her husband John MacDonald, first Superintendent of St Helena is on the headstone also. Following Alice’s death, he retired from his position on St Helena Island in April 1882. Seventeen warders gave him a silver claret jug and voiced their appreciation at his farewell:

We the undersigned, desire to express our sincere regret at your departure from this establishment, with which you have been connected for a period of 15 years. During this time you have, by your kindly bearing towards all with whom you have come into contact, endeared yourself to us by the strongest ties of friendship and goodwill, and in begging your acceptance of this souvenir we trust that you will long live to enjoy your retirement. We wish you a pleasant voyage to Europe and trust that you will return thoroughly restored to health.(3)

By the time he returned from Scotland in November 1882, he was remarried to Louisa McPherson. They spent a couple of years as living on the Pandora Sugar Estate near Rockhampton where John was Manager, but moved back to Brisbane when the venture was unsuccessful. John and Louisa were living at Hamilton, Brisbane, when John died on the 18th June 1895. His epitaph reads

Interestingly, the headstone also seems to contain a reference to their son, but it reads Malcolm when his name was John Malcolm. John would have spent a considerable amount of his childhood on St Helena Island amongst the other warders’ children. 17 years old on his mother’s death, he may have travelled to Scotland with John Snr in 1882, as John Malcolm’s death in February 1888 was ‘after a long and painful illness from a cold contracted in Scotland.’(4) He was aged only 23. 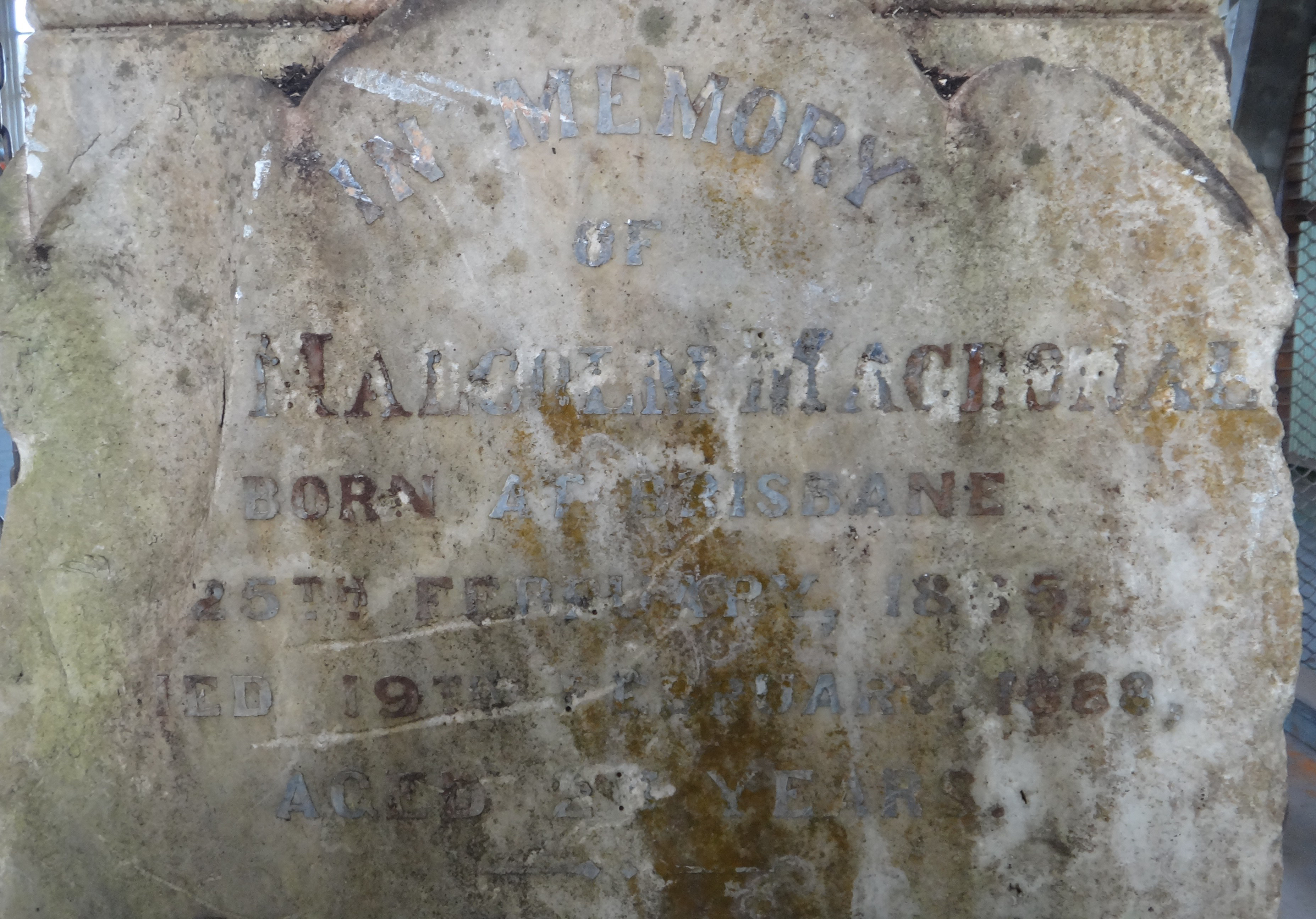 The final McDonald on the headstone is that of yet another John – John Alexander MacDonald. John Alexander was firstly a warder on St Helena in the 1870’s, at the same time as his uncle. He returned as Superintendent in 1916, living in the second Superintendent’s quarters with his second wife Helen and his 3 adult daughters. John was described as a humanitarian man, as well as:

“a handsome fellow of strong build. He was something of a ‘snappy’ dresser, for those times, wearing light coloured suits and his smart cap.

He died ‘in harness’ one night as he worked in the guard house in the prison stockade in June 1924, aged 64. He was found by one of the warders sitting in his chair at his desk, having passed away suddenly. His family left the island weeks later. His epitaph merely states ‘Resting.’ 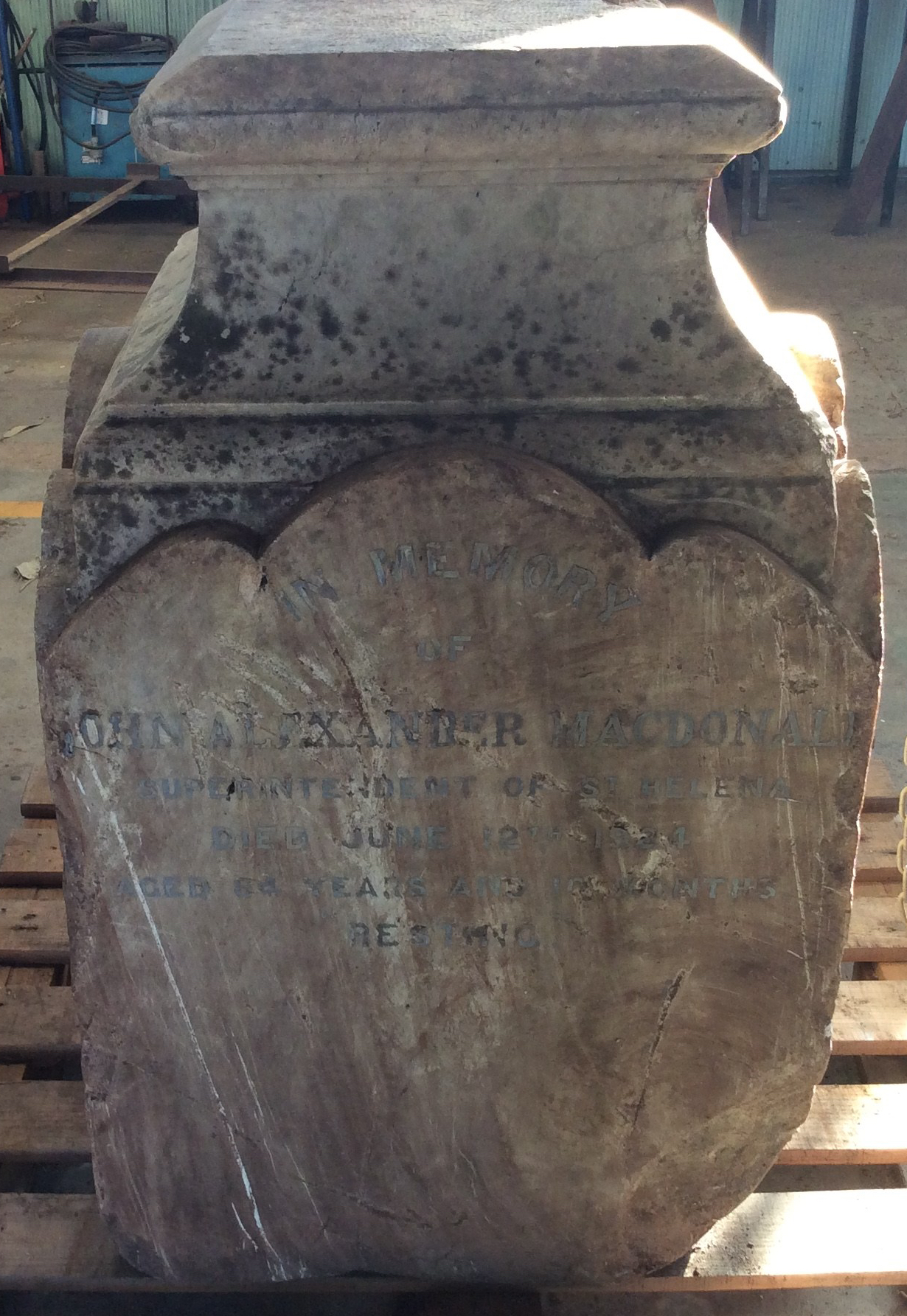 So, you’ve heard it first here – a great piece of history that could have been lost forever except for the foresight of individuals in our community. The headstone isn’t in situ yet, as it is getting a good clean and polish by the rangers. But when we finally have McDonalds visible again on St Helena Island, it will be a very fitting memorial to a family that whose history on St Helena stretches from the absolute beginning of its prison history. Encased in this marble headstone are the stories of 2 Superintendents, 2 deaths on the island, one of the earliest St Helena families and a dynasty that stretched over 58 years.

3 thoughts on “McDonalds are on St Helena Island.”