I’d be forgiven for thinking I have the whole 9th Battalion stationed on St Helena Island. Many of St Helena Penal Establishment’s Soldier / Warders  enlisted into the 9th Battalion, which was the first battalion recruited in Queensland for the A.I.F within weeks of the declaration of the First World War. St Helena’s warders – men like Octavius and Irwin Spreadborough and Frank ‘Trooper’ Hills, were men who enlisted early in the war and so were sent to battles in Gallipoli and France.

The 9th Brigade, together with the 10th, 11th and 12th Battalions, formed the 3rd Brigade. By the end of 1914, they were already in Egypt, and subsequently the 3rd Brigade was the covering force for the ANZAC landing on 25 April 1915, first ashore at around 4.30 am. The battalion was heavily involved in establishing and defending the front line of the ANZAC beachhead. It served at ANZAC until the evacuation in December 1915. (1)

Today we meet veteran soldier and 9th Battalion member Frederick Windibank via a letter to his wife Annie:

Veteran Soldier is an understatement, as Frederick actually joined the Imperial Army at the age of 14 years old!

Frederick brought his soldiering and music skills to bear in Australia, becoming both military drill sergeant and drum major at Ipswich, Warwick and later the Brisbane Caledonian Pipe Band. On the day of his embarkation for Gallipoli, he paraded the streets as part of his send off:

Sergeant-Major Windibank, who recently left Warwick to Join the Expeditionary force at Enoggera, acted as drum-major to the troops who paraded through Brisbane on Saturday last. Subsequently Sergt. Major Windibank was presented with a staff, suitably inscribed. (7)

Frederick Windibank was already promoted to Company Sergeant Major before he had even arrived at the battle on Gallipoli’s shores.  On the 18th July 1915, he was promoted Regimental Sergeant Major at Anzac Cove, but was in the Anzac hospital 5 weeks later for ‘Debility.’ By the 23 September 1915, his sickness was described as ‘severe’ and he was transferred to King George Hospital Stamford in England. In fact it was enough to warrant him being sent home in March 1916 and he was Medically Discharged due to  Rheumatism. (1) Once home he worked as a recruiting sergeant in Maryborough and Brisbane before arriving at St Helena Island as Warder.

From the 9th June 1917 until the 13th September 1921, Frederick lived and worked on St Helena Island with many of the other returned soldier and we can only imagine Frank Hills, Octavius Spreadborough and Frederick reminiscing about the scenes they witnessed that only they could understand. Certainly both Frank Hills and Frederick utilised their army skills in the St Helena Rifle Club, participating in many local contests, with Frederick representing the St Helena Club in the Triangular Match in 1919. 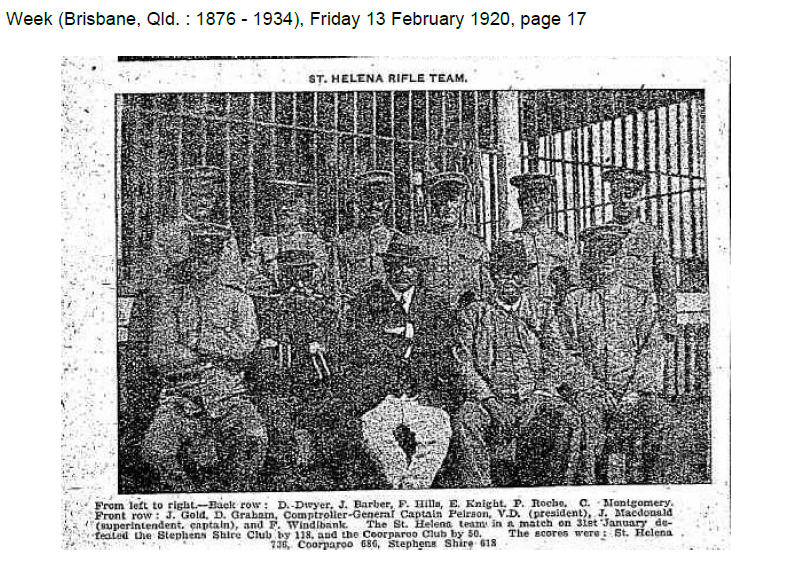 A mass transferral of warders in 1921 saw Frederick become a warder at Boggo Road Gaol, where he remained until his death in Rosemount Military Hospital in 1939. To the end, he performed his prison duties well, foiling an escape attempt as late as 1937:

NOTORIOUS Cracow hold-up bandit, Jack Howard, who, as exclusively reported in “Truth” last Sunday, sensationally attempted to make his escape from Boggo-road Gaol in the early hours of the previous morning was sentenced for the offence after a gaol trial which was concluded yesterday afternoon. …

Warders Windibank (who first discovered Howard’s absence from the kitchen, where he was “early” cook) and McCarthy, who found the rope with which the bandit planned to escape, were the two principal witnesses….

Howard denied that he had made any attempt to escape and declared that after he was let out of his cell and placed in the kitchen he merely went into the yard at the back of the kitchen, and had returned to continue his duties. He said he had just picked up a broom to sweep the floor when Warder Windibank entered. Both doors were then locked on him, and he remained a prisoner in the kitchen until removed and placed in his cell. Evidence of Windibank and McCarthy, however, disclosed that Howard had left the kitchen and was seen returning, apparently after having realised that a search was being made for him and it would be Impossible for him to then carry out his plans. A search by McCarthy, whose suspicions were aroused by a remark made by Howard through the kitchen window, brought to light a thickly-plaited calico rope, conveniently spiced with knots along its 25ft. length, and then spliced on to a kitchen poker that had been bent over to form a hook at one end. This rope was found hanging over the stockade fence, and it is thought that Howard intended to make use of it by so throwing it that the hook would catch over the platform of one of the guard towers at that part of the gaol, where he obviously intended to make his attempt at escape.  (8)

Another 9th battalion warder will join the growing list on our next post, as part of St Helena Community’s November WWI remembrance.

And thanks to Sandy Liddle, volunteer historian extraordinaire, for the detailed research she undertakes to ensure all our information is accurate and amazing!