If people know you as ‘Trooper’ and not Frank, then your life’s work is already preceding you. There’s a fair few life-long soldiers in the ranks of the Soldier/Warders at St Helena Penal Establishment, with Frank ‘Trooper’ Hills being the prime example. Here’s a man who fought in both the Boer War and World War I and then came back to become one of the last warders stationed at St Helena before it closed.

Veteran gaol warder Frank (‘Trooper”) Hills will be cremated in Brisbane to-day. Mr. Hills, who was 71, was a warder at St. Helena and Boggo Road gaols for 29 years before he retired in 1947. He was struck by a car in Brisbane on Wednesday night and died a few hours afterwards. He lived in Delville Avenue, Yeerongpilly, and had served in the Boer War and World War I. Until yesterday he had never missed an Anzac Day march in Brisbane. (1)

Alongside fellow St Helena Warders Benjamin Rudhall and John Burns, Frank Hills has become the third warder at St Helena Penal Establishment to be involved in the Boer War conflict. Having been born in Sussex, England (2) he served as part of the British Army, and fought as part of the South African Light Horse Military Unit from May to December 1901 and the Mounted Volunteers from 1901 to July 1902. (3)

Upon emigration to Australia, ‘Trooper’ Hills remained in military duty in Queensland, joining the Royal Australian Garrison Artillery on the 27th March 1907. Initially he was stationed at Victoria Barracks, Petrie Terrace, where he met his wife Helen Reid (4) who was also living at the barracks. Married in 1911, they remained for 2 years until they were stationed at Fort Lytton, at the mouth of the Brisbane River in 1913 and 1914. (5) This is an exciting find for me, as I’ve had a bit to do with Fort Lytton over the years. The jigsaw puzzle pieces between the various heritage sites around this part of Moreton Bay continue to get more and more interwoven.

The call for enlistment in World War1 came on the 4th September 1914, when at age 31 he became No 248 in the 9th Infantry battalion. By the time he embarked from Australia 3 weeks later, he had already been promoted to Sergeant, and became Corporal Sergeant Major in Anzac Cove, Gallipoli by July 1915. Frank was wounded in April but returned to the bitter fighting at Anzac Cove. It was jaundice that saw him shipped from Gallipoli to Alexandria at the end of 1915 and he was in and out of hospital in Mudros and Cairo with jaundice until he embarked for Marseilles, France in April 1916. 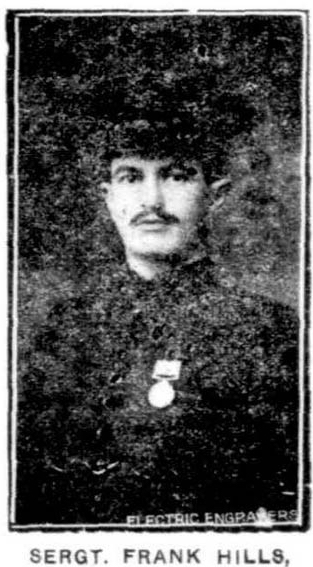 1916 and 1917 saw Frank in active campaigns that saw him receive a gunshot wound to the buttock, two periods in England and a promotion to Regimental Sergeant Major. He remained actively fighting with the 9th Batallion in France until the 10th August 1918. Sent home on Submarine Guard duty to Australia on the 24/8/18, Frank was finally discharged at the end of the year after 4 long years in the war’s most intense and horrific battlefields. (3)

What does a life-long soldier do when he returns home without a job? He enters the Prison service at St Helena Penal Establishment as a warder. But attacks and wounds did not stop there, though thankfully not to himself. Frank was involved in an altercation in 1922 I over ‘carbolic’ soap for cleaning which saw Warder McNamara stabbed in the neck:

Witness again advised the prisoner to go quietly, but he mumbled something. Hill and witness then caught hold of the accused, who struggled violently. Hills and witness took him towards No. 1 cell, but when they got to the intermediate gate the prisoner struck witness on the left side of the neck which immediately became benumbed. Witness had not seen anything in the prisoner’s hand before, but he noticed him throw something towards “B” yard, saw the glint of something passing through the air and heard the sound of something metallic strike the rails of “B” yard.

Witness and Hills retained their hold upon the accused, who said to witness, “You have something to remember now.” Witness put his hand to his neck, and one of his fingers entered the wound. Witness said to Hills. “He has stabbed me.” Hills replied, “Yes, lad, you’ve got a slit.” Witness, whose wound bled very freely, was attended to at the prison. Afterwards he was removed to the General Hospital, where he was detained for a month. Witness’s voice, previously was a very strong one. (6)

Frank Hills also stopped an escape attempt in 1924, with nothing but bravado and the pipe of fellow warder Angus MacPherson. 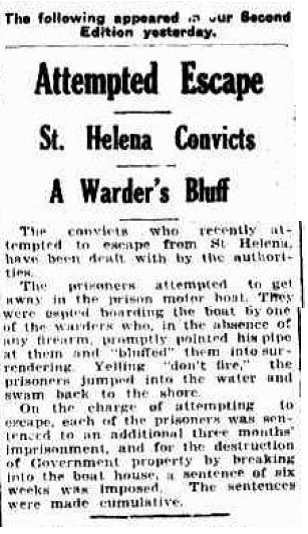 ‘On Thursday the Acting Superintendent of St. Helena missed prisoners Patrick Gavin and Reginald Davidson and that on a search being made they were found by Warders’ MacPherson and Hill endeavouring to escape from the Island in a small dingy which they had obtained from the coal shed on the flat near the jetty… It seems Warder Angus MacPherson actually pointed his pipe at the escapees, when threatening to shoot them. Neither he nor Warder Hills had a firearm with them at the time. (7)

Frank Hills was one of the last 7 prison staff on St Helena Island, being transferred to the Brisbane Prison (Boggo Rd) on the 8th April 1931. It is hard to imagine the major changes he oversaw – pulling down and relocating buildings, conversion of a major , harsh stronghold for long term prisoners into a more relaxed Prison Farm, installation of an ‘Honour System’ as a means of discipline, and the removal of the majority of long term prisoners to Brisbane.

This was by far not the end of his career, as he remained at Boggo Rd another 16 years until his retirement in 1947. Frank’s character and perspective on life and people shine brightly through his reflection of his working career and the characters he spent time with over 29 years:

Everyone in gaol ‘quite innocent’

Some inmates believe no one in gaol is “guilty” to his mates, but all think each other perfectly innocent. Confidence men are the cream of gaol aristocracy, with petty thieves and metho drinkers on the lowest rung.

These discoveries were made by Mr. Frank (‘Trooper’) Hills, of Yeerongpilly, who retired last month after 29 years as a prison warder, mostly spent at Boggo Road. Mr. Hills, who is now 66, says he has met some pretty “bad eggs,” but others were just victims of circumstances. Boggo Road, he says, has its fair share of talented musicians, professional men, and expert tradesmen. It has its “regulars,” too. They are the small-time thief, burglar, and metho drinker.

Mr. Hills says the word “criminal” is abused. He thinks most of the prisoners are unfortunate victims of circumstances. He instanced the number of crimes committed impulsively after drinking bouts or fits of depression. However, he says, the “professionals” are proud of their work, and respect the “slick operator.” One pickpocket boasted that he was the slickest operator in Queensland. He said that if he served six months a year in gaol he was very well paid for his trouble.

Things have changed a lot since the harsh old prison days. Inmates now work a 40-hour week, and can learn carpentry, tailoring, bootmaking, or saddlers’ work. They can take correspondence courses, and can use the gaol’s well-equipped library. (8)

It’s not hard to understand how a tough and hardened Soldier/ Warder Like Frank Hill with a lifetime of discipline, hard work and war-time battles behind him, sees that life has become ‘easy’ for prisoners and society alike. Yet after 29 years, he remains a warder who prefers to see prisoners as good people dealing with a bad hand dealt in life.