There’s been a bit of a break since my last post. 2018 has ended and 2019 has begun in between that time, so I’ll devote this post to ‘endings and beginnings.’ Let’s celebrate the great things we have done last year and give you a little taste of the amazing things ahead for the St Helena Community in 2019.

Last year marked the start of the St Helena Community, with myself, Belinda, writing the blog stories and combining with Lauren to conduct research and answer enquiries. We’ve talked with loads of family members searching for their ancestors, including Chief Warder David Graham, Warder Henry Clements, Warder Williams, Warder Edwin Cloherty amongst others. Some of these stories are still waiting for their turn to be highlighted as a blog post, but we have provided family members with detailed profiles to add to their family history. Belinda is also on a mission to uncover the women of St Helena Island, so they can be written into history forever.

Early on we came across a burial of Elizabeth Crompton on St Helena Island in 1865. This discovery was made by her ancestors and led to 2 wonderful events – a changing of the known history of pre-prison times on St Helena Island and the meeting of Sandy Liddle, now an integral and talented member of the St Helena Community. Sandy has been a miracle worker in building extensive personal biographies and offers a natural extension to the work Lauren and I have begun. How lucky we are to expand the team with such a positive, historical-research-lover as Sandy.

Warder James Aird’s fabulous personal diary, written in the late 1860’s, provided a window to explore the very first St Helena warders and their connections to the Brisbane Water Police and the Prison hulk ‘Proserpine.’ I was amazed to discover the close, personal, life- long connections between many early warders and their Superintendent John McDonald, and it was at this point that I realised how much I did not know and how much there was to learn. The diaries also gave us a window into the Indigenous history of Brisbane and Moreton Bay – an ancient, complex history whose stories are vastly undertold. I hope to continue to uncover these.

A trip to St Helena Island in July 2018 reinvigorated Lauren and I and allowed us to pursue some ideas. We were fortunate enough to meet some visiting historians Professor Clare Anderson and Tamsin O’Connor, who have both conducted extensive research into Colonial Penal Establishments and Moreton Bay Penal settlement respectively. Connecting St Helena to global politics and legal systems is immensely important in gaining perspective on how this small island is a microcosm of wider society.  My cousin Paula Peeters also joined us on this trip, as a botanical artist. Her previous drawing had helped reveal the original forest species on the island that were used by early warders to create masterpieces of mosaic wood furnishings, and she was able to add more sketches to our store of beautiful hand drawn images.

Writing desk made by Warder Samuel Olson in the 1870’s

History changed again with my research discoveries of the first 2 deaths of children on St Helena in the 1870’s and 6 new burials in the small Warder’s Children’s cemetery, doubling its known size. We can now add the Bowden, Hamilton, Smyth, MacPherson and Robertson families to the St Helena deaths and cemetery’s history. The free St Helena Island Warders Children’s Cemetery is available by clicking here, and we hope you enjoy this new information, as it contains historical events that have never been shared since the close of the prison.

On the subject of cemeteries, a major event occurred on the island courtesy of the hard working and dedicated Qld Parks and Wildlife Service Rangers, Roland, Daley, Mette and Mark. The headstone from Superintendent John MacDonald, his wife Alice, son John Malcolm and nephew Superintendent John Alexander MacDonald was brought over to St Helena Island. Rescued from Toowong cemetery redevelopment and kept in a backyard for decades, the headstone is now proudly in place in the Superintendent’s garden. Please make sure you find it on your next visit. 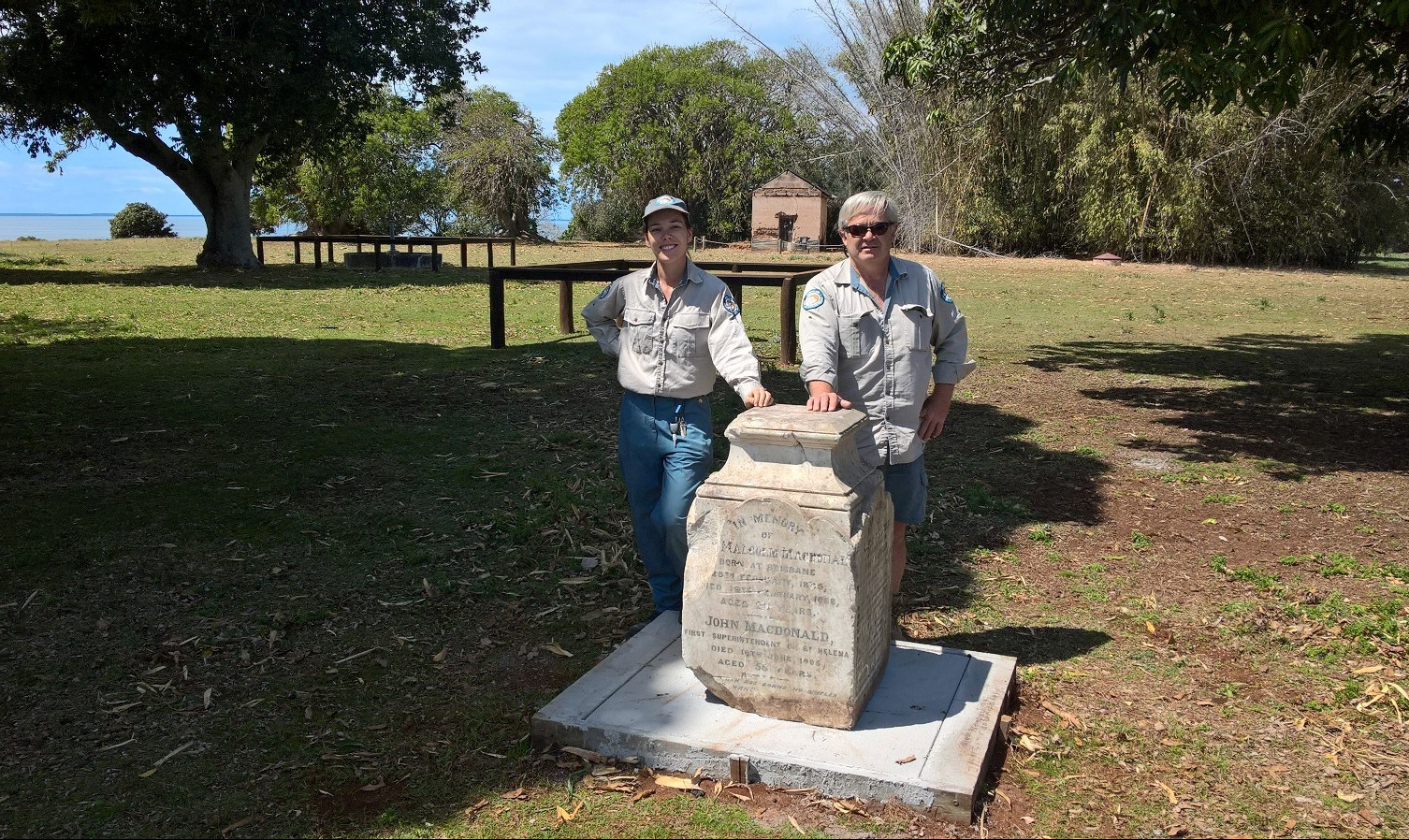 I finished the year with stories of St Helena Prison Warders who had enlisted in World War I, the timing of which correlated with the end of the war in November 1918. These warders were either stationed at the St Helena Island Penal Establishment before enlisting, or were employed there upon return to Australia at the end of their war service. Some of the stories have been shared via the blog post, including Frederick Windibank, Frank Hills, John Burns, John Mitchell, Michael Mogan, Lomas and Octavus Spreadborough and Edward Heathcock,. The story of Warder/Soldier Ludwig Rowe also surprisingly gave me a new discovery – Ludwig was a St Helena Warder who ended up becoming a St Helena prisoner! World War I soldier Edmund Knight also provided new history of a courtship begun on St Helena Island on his return from war, between Edmund and the storekeeper’s daughter Olga Aebli. I also snuck in a story on Benjamin Rudhall, who was a Boer War soldier, as this has not been realised previously either.

I actually have 47 names of St Helena Warder / Soldiers and 2 more who applied for exemption. Did I know I was going to get 49 names at the beginning of my quest? Absolutely not, but how fabulous to add that significant chapter to the known history of St Helena Island. I intend to put together a small book on these warders as a way of paying tribute and preserving St Helena Island’s military history. (Watch this space!)

To add to the ‘endings’ theme of this post, I’d like to finish the chapter I’ve been writing about what happened to St Helena’s ‘Digger Warders.’ Because the final chapter in their story occurred in 1921, when history changed again for the St Helena Penal Establishment and the Queensland Prison system in Brisbane.

PRISON REFORM.
ST. HELENA AS REFORMATORY.
…Behind the above matter-of-fact announcement, in the Queensland Government “Gazette” of 27th August, lies an important scheme of prison re-organisation in Brisbane. Women delinquents, who hitherto have been housed in portion of the Boggo road gaol, will in future be imprisoned in the new buildings on the South Brisbane gaol reserve. This will leave room at Boggo road for the accommodation there of more male prisoners, and the proposal is to send there men who would in the ordinary course of things be sent across to the penal establishment on the island of St. Helena in Moreton Bay.
St. Helena is to be used more as a reformatory than a prison. Hitherto the penal establishment has been used for the imprisonment of prisoners serving sentences of 12 months and upwards. Fewer prisoners at St. Helena will obviously mean a reduction in the staff, and the idea is to billet the warders not wanted there at Goodna and other Government institutions. (1)

The reduction of Warders on St Helena Island was extensive, and must have permanently changed the connectedness and vibrancy of the warder community on the island. In 1921,warder numbers were reduced from 45 to 16, with ‘a fair number of men (being) absorbed in other gaols. With a reduction of two-thirds of the staff as well as the transfer of large numbers of prisoners at the same time, we can only imagine how empty and foreign the St Helena prison would feel afterwards for the remaining men. St Helena was also reclassified as Prison Farm, which lead to drastic changes in the management and discipline within the prison. (2) 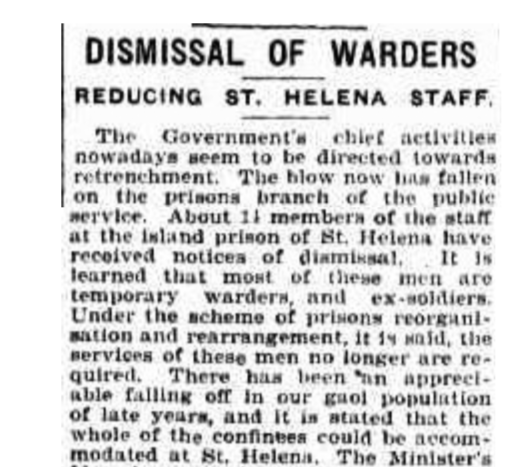 Many of the warders transferred or dismissed were the temporary staff, and many of these were the returned soldiers who had been offered employment in the Prison as part of the Government Repatriation schemes for returned soldiers. Due to this, emotional reactions within the Brisbane population to the termination of employment of ‘Digger/Warders’ surfaced, as memories were still fresh from a war that ended only 3 years earlier. (3) 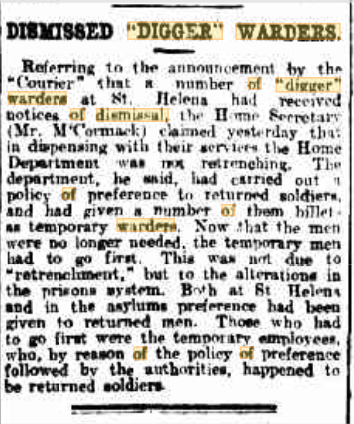 Of the Warder/ Soldiers on St Helena Island, some were transferred as part of the large contingent transferred en-masse to Brisbane Prison on the 14th September 1921, including Michael Mogan, Daniel Dwyer, William Landrigan and Edmund Knight. The 14 mentioned in the news article who found their’ services were dispensed with’ due to a ‘reduction in staff,’ included St Helena Warders Michael Millett, Frederick Todd, Octavus Spreadborough and Frederick Windibank. Interestingly Octavus Spreadborough, Frederick Windibank and Michael Millet seemed to have been re-employed into the prison service again within a year.

And so we bid farewell to our 2018 stories that have allowed us to begin painting a more colourful picture of St Helena Island’s history. The canvas is huge and there are many blank sections just waiting to be filled by further research and storytelling in 2019.

Come back next week to find out about our most exciting partnership yet with the Queensland State Archives. And set the record button on your TV for February 8th or February 10th to find out about St Helena’s amazing vegetation on Gardening Australia. More on these events and lots more in next week’s blog ‘Endings and beginnings – Part 2, Exciting 2019.’